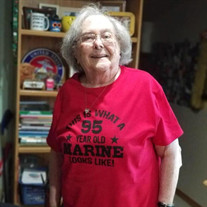 Adele B. Shimanoff, age 97, of Ashland (formerly of Central Point and Grants Pass), passed away on January 1, 2021 in Ashland Oregon. Burial will be at the Eagle Point National Cemetery. She was born in Brooklyn, New York on July 10, 1923 to Abraham and Etta (Schilling) Berres. She graduated from James Madison High School and then attended Brooklyn College. After working as a secretary for several years, she enlisted in the U. S. Marine Corps in 1945, attaining the rank of sergeant, and was discharged in August of 1946. On August 21, 1947 she married Marine Corporal Morris S. “Jim” Shimanoff in New York City. They initially lived in Elmont, New York but his Marine Corps career involved many relocations through the years and took them to Michigan, Virginia, North Carolina, Georgia, and California. When he retired in 1971, they resided in Irvine, California. She enrolled at the University of California, Irvine in 1974 and earned a Bachelor of Art’s Degree in 1977. In June of 1977 she and her husband moved to Grants Pass, Oregon. They raised miniature animals under the name of “Adele’s Adorables.” She attended Southern Oregon State College and earned a Master of Science Degree in Social Science. She subsequently taught a class at RCC entitled “Women’s Herstory.” While in Grants Pass she was active in the Grants Pass Branch of the American Association of University Women, the Women Marines Association, the Marine Corps League, the Josephine County Humane Society, Josephine’s Place, The Rogue Craftsmen, the Charlie Brown Squares and the Misty Mountain Cloggers. In 1991 they moved to Central Point where she served on the Citizen‘s Advisory Committee. While there she joined the Medford Branch of AAUW and the Roxy Ann Gem & Mineral Society. She was also a member of Friends of CASA. In 2000 they moved to Mountain Meadows Retirement Community in Ashland. She was a member of the first board of directors of the Owner’s Association and served on many different committees. She also joined the Ashland Branch of AAUW. In 2007 Adele moved to the Spring Meadow Retirement Community in Grants Pass. She resided there for 15 months and then moved back to Ashland. She was a life member of the American Association of University Women, the Women Marines Association and the Marine Corps League. She held positions of leadership in all the organizations to which she belonged. She enjoyed baking, sewing, reading, crossword puzzles, using her computer, beading, watching Jeopardy and clog dancing. She loved going on cruises and had the opportunity to sail around the world. She is survived by three sons, Perry (Susan) of San Carlos, CA, Andrew of Eugene, OR, Jeffrey (Denise) of Kailua, Hawaii, and daughter Ellen Smith (Kage) of Brookings, 11 grandchildren, Alexis, Lael, Saul, Arianne, Christopher, Jackson and Patrick Shimanoff, Jackie and Brendan Curry, Heidi Hall and Stacey Harvey, seven great grandchildren Ocean Ayres, Anais and Matisse Shimanoff, Michael Jones, Dalton Harvey, Brandon Harvey, and Dodge Hall, one great-great-grandchild, three nieces, one nephew, and many great nieces and nephews. She was predeceased by her husband of 58 years, LtCol Morris S. “Jim” Shimanoff, her parents, her sister, Gladys Cole, and brother, Monroe Berres. A virtual memorial/celebration of life will be scheduled in the near future. Please reach out to the family if you would like to be notified of the date. Memorial donations may be made to the American Association of University Women or the Women Marines Association.

Adele B. Shimanoff, age 97, of Ashland (formerly of Central Point and Grants Pass), passed away on January 1, 2021 in Ashland Oregon. Burial will be at the Eagle Point National Cemetery. She was born in Brooklyn, New York on... View Obituary & Service Information

The family of Adele Berres Shimanoff created this Life Tributes page to make it easy to share your memories.

Adele B. Shimanoff, age 97, of Ashland (formerly of Central Point...

Send flowers to the Shimanoff family.