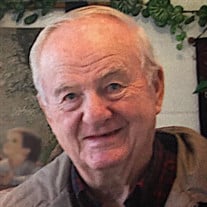 March 10, 1028 – November 26, 2019 Alan Ourant passed away at the age of 91 in Ashland, OR on November 26, 2019, following his wife of 59 years, Marilyn, who passed a few months earlier. He is survived by his son, John, and daughter, Leslie, and two grandchildren. Alan was born in Whiting, Indiana, the youngest of four. He relocated to Long Beach, CA in 1947 after returning from Army service in post-WWII Japan. In a long career with Standard Oil of California, later Chevron, he lived in the Los Angeles area, San Diego, and Hawaii. He and his wife moved to Ashland in 2001 to be near his son’s family. He never forgot his simple, depression-era roots: he took good care of his belongings, keeping things in working shape for years beyond their years, and he placed a high value on being helpful to others. He prided himself on being a devoted husband and father. He was an active member of Kiwanis in San Diego and the Lions Club in Ashland, and was a member of Grace Lutheran Church in Ashland. Alan could strike up a conversation with anybody and was an expert at staying light-hearted with a well-timed joke. He was a sports fan, especially football, which he played in high school, and basketball, which he played at Long Beach State. Alan will be buried at the Eagle Point National Cemetery on Tuesday, December 3, 2019 at 2:00 pm.

The family of Alan Carl Ourant created this Life Tributes page to make it easy to share your memories.

Alan Ourant passed away at...

Send flowers to the Ourant family.