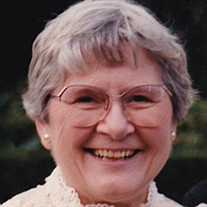 Bernice H. “Bernie” Tank Bernice Lois Honold Tank, of Talent, Ore., died peacefully at home Wednesday, Jan. 12, 2022, surrounded by family and her devoted German shepherd Henry. She was 97. Although she had lived in Talent the past four years, her true hometown was Riverside, Calif., where she and her husband Robert raised three children and where she taught in the Riverside Unified School District for 25 years. A natural-born and beloved teacher, Bernice was regularly greeted on the streets and in the shops of Riverside by former students who told her how much she meant to them and to their education. Although she began as a music teacher, she switched gears in the 1970s and became a computer pioneer: She ran the school district’s first computer lab at University Heights Middle School and was often asked to speak on computer technology, education, and math. Service to the community was important to Bernice. While their children were growing up, she and Robert led Girl Scout and Cub Scout troops. Bernice’s daughter remembers that as she was growing up her friends always wanted to come over to her house, not to play with her but to hang out with “Mrs. Tank.” Upon retirement in the 1990s, Bernice and Robert became master gardeners and gave a record number of hours of service to the University of California at Riverside Botanic Gardens, where they are remembered fondly. A Midwesterner by birth, Bernice was born (1924), raised, and married (1946) in Detroit, Mich., and graduated from Valparaiso University, Valparaiso, Ind., in 1947. Some nine years later the family moved to the brighter (and warmer) climes of Southern California. Bernice is survived by her three children: Cynthia (Michael Zuzel) of Talent, Ore., Kenneth (Kathy Tank) of Menifee, Ca., and William (Kim Nikon) of Cave Creek, Az. She is also survived by 5 grandchildren and 1 great-grandchild. Her husband Robert died in 2016. When the family gathered in Riverside in 2017 to give her a proper send-off for her move to Oregon, she wrote this message: “My wish for each of you is that you always remember that you are a Tank. And that means that you face life with courage, honesty, and faith. You each do me and, of course, Bob, the honor of being the best in whatever path of life you choose...That’s what being a Tank means. I love you all.” Bernice will be inurned at Riverside National Cemetery next to her husband, a WWII veteran who fought on Iwo Jima. She asked that friends who want to make a donation in her memory donate to the UCR Botanic Gardens (https://gardens.ucr.edu/giving).

Bernice H. &#8220;Bernie&#8221; Tank Bernice Lois Honold Tank, of Talent, Ore., died peacefully at home Wednesday, Jan. 12, 2022, surrounded by family and her devoted German shepherd Henry. She was 97. Although she had lived in Talent the past... View Obituary & Service Information

The family of Bernice H. Tank created this Life Tributes page to make it easy to share your memories.

Send flowers to the Tank family.