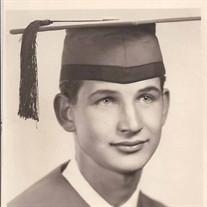 Not sure what to send?

It is with profound sadness that we announce the passing of Carol Wallace (Chris) Barnes, 85, of Medford Oregon, on Thursday, April 21, 2022 at home. Chris was born August 10, 1936 in Modoc Point, Oregon, to Everett Irl Barnes and Valborg Marie (Tillie) Ericksen. He was raised in Klamath Falls and graduated from Klamath Union HS in 1954. He married his high school sweetheart, Ruth Davison, in 1956 and together they had three children; Alan, Linda and Curtis. Their marriage ended in 1962. In 1963, after a whirlwind romance, Chris married Lois Houser of Ashland, in Reno NV, and that union created a blended family that included her children from a previous marriage; Darrell, David and Darlene. The new household was noisy and full, with six children ranging in age from three to seven and Chris thrived as father to them all. That marriage ended in 1986, but they remained friends until his death. In 1989 he met Nita Simmons through a mutual acquaintance, and they married in 1990 in Reno, NV. He then became “Pops” to her four children; Buddy, Crickett, Buster and Derrill. Chris lost Nita to cancer in 2019, after almost 30 years of marriage. She was truly the love of his life. Chris was a true Oregon woodsman, spending his entire working career in lumber mills in Klamath, Crook and Jackson Counties. He retired in 1979 as head planerman from Boise Cascade, formerly Elks Lumber. When not working, his favorite pastimes included hunting, fishing, camping and riding quads. He was never so at home as he was in the woods or on a lake, and throughout his life he imparted that love to his children and grandchildren. He was an avid gardener and loved spending time in his yard, whether it be actually working or just puttering around. He could grow anything, but was known particularly for producing the best tomatoes, and sharing the bounty with everyone he could. Chris’s proudest role in life, however, was as a grandfather. He was known as Gpa to his many grandchildren and great grandchildren and he had nicknames for all. His and Nita’s home was always full of kids year round, and all have unforgettable stories of spending the night there – some even as grown adults who had moved away but came home for a visit. There were so many kids wanting to spend time with them that they eventually had to keep a spreadsheet to keep track of turns. Weekends were filled with video games, cookie baking, and picking tomatoes. Gpa Chris was famous for his homemade chili and peanut brittle, but mostly his beef stew. He also never failed to have fruit snacks and Otter Pops on hand for little visitors. For relaxation, he loved reading and watching Westerns, and never passed up a game of cribbage, which he taught to many of his grandkids. Chris is survived by sons Darrell, Alan (Jodie), David (Deanna), Curtis, Buster (Rae), daughters Linda (Ken), Darlene, and his faithful dogs, Sassy and Daisy. He also leaves a legacy of numerous grandchildren, great grandchildren and great-great grandchildren. He was preceded in death by his parents, brothers Earl and Mitchell, wife Nita Barnes, son-in-law David Barrus, son Derrill, granddaughter Jacline, and great grandson Noah. The family wishes to extend heartfelt gratitude to Dr. Edward Helman and his staff for the many years of attentive care and friendship, and for putting up with all the bad jokes and puns. A service will be held Saturday, June 4, at 11 am at Litwiller-Simonsen Funeral Home in Ashland. In lieu of flowers, Chris asked that donations be made to St Jude Children’s Research Hospital at https://www.stjude.org/about-st-jude/faq/how-can-i-donate-to-st-jude.html.

It is with profound sadness that we announce the passing of Carol Wallace (Chris) Barnes, 85, of Medford Oregon, on Thursday, April 21, 2022 at home. Chris was born August 10, 1936 in Modoc Point, Oregon, to Everett Irl Barnes and Valborg... View Obituary & Service Information

The family of Carol "Chris" Barnes created this Life Tributes page to make it easy to share your memories.

It is with profound sadness that we announce the passing of Carol...