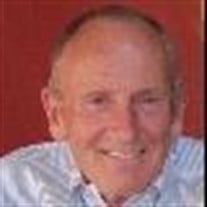 Christopher Hitchcock Miller June 1947 - December 2019 As a friend, there was none better. Chris Miller brought people together, stayed in touch over the years, and was always ready to introduce a new person into his wide circle of friends. He may have set a record for serving as best man at friends' weddings, and he could be counted on to organize reunions, be they high school, college, family or others. Chris was born in Canandaigua, NY on June 11, 1947. His parents were Calvin Wheeler Miller and Elizabeth Gorrill Miller. He died in his home in Ashland, OR on December 21, 2019 with his wife Lindy Ahmann Miller at his side. Beside his wife, Chris leaves behind his sister, Deborah Miller Rothschild and her husband Herb of Phoenix, OR, his brother, Peter Miller and his wife Sandy of Reno, NV, numerous nieces and nephews and their children, all of whom called him "Uncle Marvelous," and many, many friends. Chris graduated from San Marino High School in San Marino, CA and attended Williams College and Occidental College before graduating from California State University, Hayward with a BA in Art History. For most of his career Chris worked in the California wine industry and became the V.P. & General Manager for Wine Warehouse in Richmond. After retiring and moving to Ashland in 2004, he continued working at part-time jobs where he could interact with the public, be they as an assistant store manager at Harry and David, the assistant wine and beer buyer at Market of Choice, or a merchandiser of Peet's Coffee. In Ashland, Chris became enamored of blues music and became active with the Ashland Blues Society. For several Januarys he made a pilgrimage to Memphis, TN to attend the International Blues Challenge. As a result, blues musicians and enthusiasts from all over the world became his friends. Chris' other interests included art, reading, progressive politics, and high school and college football. His struggle with alcohol addiction led Chris to AA a quarter of a century ago. He took particular pride in carrying a one-day chip in his pocket for 25 years to acknowledge his sobriety. Some of the last guests to come his home were fellow members of AA, who conducted a meeting in his living room. A celebration of Chris' life will be announced at a later date. His family asks that donations in Chris' memory be made to Southern Oregon Friends of Hospice (sofriendsofhospice.org) or The Blues Foundation in Memphis, TN (blues.org).

Christopher Hitchcock Miller June 1947 - December 2019 As a friend, there was none better. Chris Miller brought people together, stayed in touch over the years, and was always ready to introduce a new person into his wide circle of friends.... View Obituary & Service Information

The family of Christopher Hitchcock Miller created this Life Tributes page to make it easy to share your memories.

Send flowers to the Miller family.