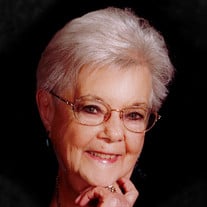 Jeannette passed away peacefully surrounded by family December 7, 2019. She was born into an extended, loving family September 1, 1922 in Salt Lake City, Utah to Ralph Shipley Burton and Cloma Taylor Burton. She was a great granddaughter of Mormon pioneer, Robert T. Burton, and a Mayflower descendant. At the age of six she moved with her family to Oregon and the Rogue River valley, settling in Ashland. She attended the Ashland public schools, graduating from Ashland High School with the Class of 1940, and was very proud to be their first majorette. Jeannette then attended Medford School of Beauty and worked as a hairdresser in the Ashland Hotel Beauty Shop and many other salons while she and Dale moved from airbase to airbase. The majority of her career was spent at her favorite job – housewife and mother. When her children were in their teens she embarked on a new career as secretary at First Christian Church in Medford. On October 23, 1943 she married her high school sweetheart, Dale Williams, in St. Louis, Missouri where he was an aviation cadet. Following World War II, they returned to Ashland, where their three children were born. In 1959 they moved to Eugene for three years, returning to Medford in 1962 where she was active in the Roosevelt School P.T.A., Girl Scouts where she served as scout leader for five years, and St. Luke’s Methodist Church as Church School Superintendent. Jeannette was a charter member of Southern Oregon Tennis Club where she developed lifelong friendships which continue to this day. She was a member of the non-denominational Monday Prayer Group for over 50 years and also a member of Westminster Presbyterian Church. She enjoyed playing tennis and bridge and was an accomplished seamstress. Most of all she loved her friends and family. Jeannette was preceded in death by a daughter, Jeanne Marie in 1972, and her husband, Maurice Dale Williams in 2007. She is survived by her son, Monte Williams, daughter Marianne McCamey (aka Willie), grandsons Matt Williams, Michael (Sara) Williams, Ryan (Megan) Williams and granddaughter Megan (Gavin) Rothrock and eight great grandchildren. A graveside service will be held at Mt. View Cemetery, Ashland, OR, Wednesday Dec. 18 at 2pm with a reception to follow at Litwiller-Simonsen Funeral Home. All are welcome. A memorial will be held in the spring (May) at Westminster Presbyterian in Medford. Arrangements by Litwiller-Simonsen Funeral Home, 1811 Ashland Street, Ashland, OR. www.litwillersimonsen.com

Jeannette passed away peacefully surrounded by family December 7, 2019. She was born into an extended, loving family September 1, 1922 in Salt Lake City, Utah to Ralph Shipley Burton and Cloma Taylor Burton. She was a great granddaughter of... View Obituary & Service Information

The family of Cloma Jeannette Williams created this Life Tributes page to make it easy to share your memories.

Send flowers to the Williams family.