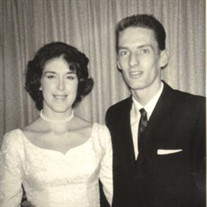 Darrell Arthur Clapp passed away peacefully February 8th, 2018, in Medford, Oregon. Roanne Marlene Hoehner Sheets Clapp passed away December 5th, 2019 while in Colorado Springs, Colorado. A memorial service and reception will be held at 10:30 am on Saturday, February 29th at Valley Bible Fellowship, 6165 S. Pacific Hwy, Talent, OR, 97540. Roanne and Darrell will be buried together at Stearns Cemetery, located near their home of 42 years. Darrell was born on August 5th, 1937 in Helena, Montana to Eleanor (Samuels) and John Clapp. Roanne was born on July 10th, 1938 in Chanute, Kansas to Onita (Cation) and Arthur Hoehner, She was adopted later by her step-father, Ollen C. Sheets. Darrell and Roanne eloped and were married on December 10, 1960 at Parks Wedding Chapel in Reno, Nevada with close family in attendance. Their marriage spanned 57 years and they celebrated their 59th wedding anniversary together in heaven. Darrell was proud of his submarine service on the USS Spinax and stayed in contact with other Spinax vets until he passed away. He worked for a short time as a police officer, then settled into his first love, wood. He bought and sold lumber for the rest of his life, joining Neeley-Nelson Lumber for many years before branching off on his own and forming Darrell Clapp Lumber Sales, Inc. Roanne worked in finance and banking until she was able to enjoy her first love of sewing, She owned her own pattern creation business, was a seamstress for the Oregon Shakespeare Festival and sewed handwoven cloth into finished designs for an Ashland weaver. Darrell was a Scoutmaster with the Boy Scouts of America, a 33-degree Mason and member of the Medford Masonic Lodge #103, a member of the Hillah Shrine in Medford, and a member of a number of lumber organizations. Roanne was a long-time member of the Talent Home Extension and served on the Jackson County Council for Home Extension. Other memberships included the Talent Garden Club, Talent Historical Society, American Sewing Guild, Rogue Valley Symphony Guild, and the Ashland Doll Club, among others. Roanne’s faith was important to her. She sang in her church choirs, played piano, taught classes for both children and adults and accepted numerous leadership positions in every church she attended. She was one of the first students to attend the former Dove Bible Institute in Medford, OR. As a lifelong and gifted woodworker, many of Darrell’s creations were for his own family to use and enjoy. If not in his workshop or office, Darrell would most often be found working on some part of the home and acreage he found so fulfilling. Roanne was a talented seamstress and was most often found in her sewing room where she’d create clothing and costumes for her family. She also enjoyed knitting, crocheting and embroidery. Roanne’s love of music permeated her life in her piano, in singing, and through teaching. For both Darrell and Roanne, their favorite hobby was family. So much of their lives and love were centered around their parents, siblings, nieces and nephews, children and granddaughters. They made so many treasured memories because of their generosity of love and time. Darrell and Roanne are survived by their son, Glenn (Kara) Clapp; daughter, Victoria (Robert) Hedenstrom; granddaughters, Lauren Hedenstrom, Susanna Hedenstrom and fiancé. Joseph Babitsky; and Josephine Hedenstrom and fiancé, Griffen Laird; They are also survived by Darrell’s sisters, Marion (John) Sands and Lois (Richard) Celestre, brother Dan (Joyce) Clapp; as well as cousins, nieces and nephews. Darrell was preceded in death by his father, John; mother, Eleanor; and sister, Delores (Oscar) Paskal. Roanne is preceded in death by her husband, Darrell; sister, Rolane (Larry) Hughes; brother, Terence Sheets; mother, Onita; father, Arthur; and stepfather, Ollen. Memorial contributions may be made to: Jackson County Home Extension Streams-Wagner Creek Cemetery American Stroke Association American Heart Association United States Submarine Veterans American Forest Resource Council Arrangements handled by: Litwiller-Simonsen Funeral Home in Ashland, Oregon; and The Springs Funeral Services in Colorado Springs, Colorado.

The family of Darrell Arthur Clapp created this Life Tributes page to make it easy to share your memories.

Send flowers to the Clapp family.