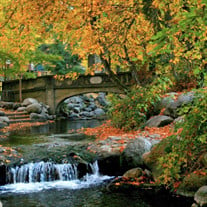 Dawn Bakerink, 90, died at home on January 6, 2022 with family present. She was a resident of Ashland, Oregon for 25 years. Dawn was born on March 15, 1931 in Eatonville, Washington. She was the youngest of four children, born to Alfred and Fannie Roeder, née Perry. Times were tough and the family moved around quite a bit. At times, they lived in an old school bus without electricity or running water. The family traveled from place to place, setting up camp wherever her father could find work. Dawn’s mother died when she was young, so once her siblings left home, Alfred agreed to let Dawn live with her older sister, Mary, in Florida. At age 13, Dawn traveled from Idaho to Key West, alone with only $5 sewn into the lining of her coat. Mary mentored Dawn, and helped her obtain training at Western Union to become a teletype operator. In1953, Dawn met Harold Sherart while visiting her father in Idaho. They married shortly thereafter and had two daughters, Elaine and Laura. The family moved to Los Angeles, and Dawn found work at a brokerage firm as a wire operator. Harold and Dawn divorced in 1962, and Dawn raised her daughters on her own, as a single mom. Dawn learned various aspects of the securities business, and after her children were grown, she took exams to become a stockbroker. This was at a time when many women had little say in their own finances and men dominated the investment world. Dawn enjoyed making her own investment decisions. In 1974, Dawn married Delbert Bakerink and eventually they settled in the North County area of San Diego, They worked together in the securities business until their retirement. They moved to Ashland, Oregon in 1996. Dawn loved animals and almost always had a resident cat and enthusiastically greeted the dogs in her neighborhood by name. She also donated generously to the Humane Society and to charities that protect wild animals and their habitats. Since childhood Dawn was always up for a road trip, and by the end of her life, she had visited every state except Maine. She also travelled abroad to Europe, South and Central America, the South Pacific, and Canada. Her lifelong hobby was collecting rocks and minerals, and she maintained a fine collection. Dawn is remembered as an adventurous, kind, considerate, and generous person. As a devoted Jehovah's Witness, Dawn took comfort in God's plan and the Bible’s promise of a future earthly paradise. She was preceded in death by her first husband, Harold Sherart, and her second husband Del Bakerink, her sister Mary Roeder Jewell, and her two brothers, Dick and Jim. Dawn is survived by her daughters, Elaine and Laura; stepdaughter, Mary; stepsons, Steve and Philip; grandchildren, Erica, Michael, Bonnie and Frank; and six great grandchildren. A memorial date will soon be announced.

Dawn Bakerink, 90, died at home on January 6, 2022 with family present. She was a resident of Ashland, Oregon for 25 years. Dawn was born on March 15, 1931 in Eatonville, Washington. She was the youngest of four children, born to Alfred and... View Obituary & Service Information

The family of Dawn Bakerink created this Life Tributes page to make it easy to share your memories.

Send flowers to the Bakerink family.