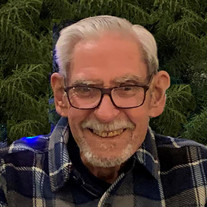 Donald Hubert Dedrick Jr. passed away on May 6, 2021, at Asante Rogue Medical Center at the age of 84. Don was a loving husband, father, grandfather and friend. He will be remembered for his quick wit, sense of humor, and love of family and country. Don was born September 19, 1936, in San Gabriel, California to Donald H. Dedrick and Ella Louise Lindsey. Don graduated from Rosemead High School in 1954. During his high school years he picked up the nickname “Lefty”, for skills on the pitching mound. Don went on to play baseball at both Pasadena City College and Citrus Jr. College where he studied printing. In 1958 he volunteered for the draft and served for two years in the United States Army. He completed basic training at Fort Ord, California and then went on to Dental Technician School at Fort Sam Houston in San Antonio, Texas. After graduation he was stationed in North Carolina at Fort Bragg. On December 18, 1959, Don married Harriet Ann Hauger in Glendora, California. While in North Carolina they welcomed their first child Dana Ann (Dedrick) Welsh on December 21, 1960. They returned to southern California where Don worked at North Hollywood Printing Economy Lithograph. On July 26, 1962, their second child, Donald Hubert Dedrick lll was born. The family moved to Ashland, Oregon in the fall of 1962, to join Don’s father and uncle in business. Don worked at and later owned Artisan Press until his retirement in 1999. As a member of the community, he was involved in the Lion’s Club, Presbyterian Church and enjoyed Ashland High School sports. Don began dating Sonja Swinney in 1978 and they later purchased a home where they joined their families. Don welcomed Brenda and Kathy as daughters of his own. After many years of companionship with Sonja, they decided to tie the knot on January 6, 1996. Throughout their relationship Don and Sonja enjoyed bowling, golf, fishing and travel. Their travels took them on cruises and tours that covered four continents and a large portion of the United States. Travels closer to home took them to multiple golf courses, lakes for fishing, and to play the slots in Reno and at Seven Feathers. Don is survived by his wife Sonja Dedrick, daughter Dana Welsh (Dan), son Don Dedrick lll (Toni), daughter Brenda Mercer (Marvin), daughter Kathy Hunt (Barry), grandchildren Jason Welsh (Elinor), Nick Welsh (Kayla), Angie Dedrick, Jennifer Willis (Steve), Jeff Mercer, Heather Hunt, Amanda Hunt, as well as five great grandchildren, Olivia, Theo, Caroline, Belen, and Alvar. He is also survived by his sister Terry Paris and sister-in-law Karen Dedrick and numerous nieces and nephews. Don was preceded in death by his parents Don and Louise, brother Richard C. Dedrick, and wife Harriet. There will be no service, but a gathering will be held at a later date. Please visit litwillersimonsen.com to sign a guestbook. Donations may be made to Ashland Parks Foundation at ashlandparksfoundation.com or Ashland Parks Foundation, 340 S. Pioneer St. Ashland, OR 97520.

Donald Hubert Dedrick Jr. passed away on May 6, 2021, at Asante Rogue Medical Center at the age of 84. Don was a loving husband, father, grandfather and friend. He will be remembered for his quick wit, sense of humor, and love of family and... View Obituary & Service Information

Send flowers to the Dedrick family.