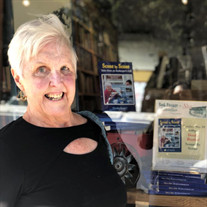 “And this is the comfort of the good, that the grave cannot hold them, and that they live as soon as they die. For death is no more than a turning of us over from time to eternity.” William Penn(1644-1718)Quaker Donnan Beeson (Deedie) Runkel, an Ashland author, raconteur, and innkeeper for nearly two decades, died at home on Nov. 28 of complications from hip replacement surgery. She was 79. Born in Princeton, W.VA. and raised in Wayne, PA., Deedie had a long career in public relations, non-profit management and government service before moving to Ashland in 2002, when she and her husband David bought and began managing Anne Hathaway’s Cottage and Garden Suites on East Main Street. In 2017, she published “Scone by Scone: Tales of an Innkeepers Life,” a collection of stories about their amusing and sometimes challenging experiences as innkeepers. Playwright Lisa Loomer commented, “the stories about an innkeeper’s life are hilarious, the characters unforgettable, and the recipes delicious.” In writing the book, Deedie returned to the college classroom 50 some years after graduating with an English degree from Penn State. In 2016, she was awarded a master’s degree in fine arts from the writing program at the University of California, Riverside. Previously, she wrote an autobiographic book “Boxes: Lifting the Lid on an American Life.” In Ashland, Deedie was an active member and past president of the Ashland Rotary Club, sang with the Peace Choir, and originated the participation of innkeepers in the Fourth of July Parade for several years under the banner “Innkeepers for Inn-Dependence.” She and a group of friends also enjoyed membership in an informal “Women and Wine” club and with another group of friends in the “Good Books, Bad Girls” book club. Her public relations career in East Coast cities included a wide variety of activities from promoting the Playboy Club in Baltimore to improving library services throughout the Commonwealth of Pennsylvania. After a move to Washington, DC, she helped coordinate the 1971 National Conference on Aging, served as public relations and Congressional relations director for the US Peace Corps, and as executive director of Peace Links, a bi-partisan anti-nuclear war organization. She was an active member of Bethesda Friends Meeting. From 1990 to 1994, Ms. Runkel served as the Peace Corps’ country director in Belize, a program with more than 100 volunteers. Later she oversaw US international economic development aid projects in parts of Africa, the Middle East and Latin America. A highlight of her life was participating in the Fourth UN World Conference on Women in Beijing, China in 1995. Throughout her life, she stayed in touch with those with whom she attended school, from elementary to graduate; those who were in play groups with her children; with her bosses and her subordinates; guests at the inn; and those who shared her interests and the neighborhoods in which she lived. Deedie is survived by her husband of 57 years, a son, two daughters, a daughter-in-law, a son-in-law and two grandchildren, along with a host of cousins, nieces, nephews and friends too numerous to count. I An international Zoom celebration of her life was held Nov. 21 with some 250 participants. Burial at The Forest on the Willow-Witt Ranch on Shale City road will be private. Contributions in her name can be made to the Ashland Rotary Foundation, P.O. Box 511, Ashland, OR 97520 with funds going to purchase clothing for children in rural communities of Guanajuato, Mexico.

&#8220;And this is the comfort of the good, that the grave cannot hold them, and that they live as soon as they die. For death is no more than a turning of us over from time to eternity.&#8221; William Penn(1644-1718)Quaker Donnan Beeson (Deedie)... View Obituary & Service Information

The family of Donnan "Deedie" Beeson Runkel created this Life Tributes page to make it easy to share your memories.

“And this is the comfort of the good, that the grave cannot hold...

Send flowers to the Runkel family.