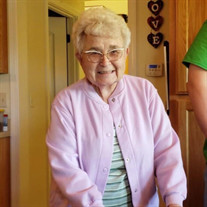 Doris Anna James was born in Trinidad, Colorado on April 30, 1932 to Anna Kufner James and James Burrough James. She passed at home in Phoenix, Oregon on March 19, 2022. She was the 2nd of 11 children. Doris loved all her family very much and was very devoted to her husband, her daughters and her grandchildren. When her oldest granddaughter passed on she never fully recovered from the loss but that first Thanksgiving she put on a brave face and cooked the dinner and comforted everyone else. The whole extended family knew that if they went to her home she would make sure they had something to eat and a place to sleep. She loved to host family events and visit with her extended family. Doris organized many of the great family reunions Doris had the gift of gab and never met a stranger. If she went looking for a job she would come home with about three; even in a bad job market. Wayne loved to tell the story of the time she went to work for Smuckers and came home and asked him what a Union Steward does because she was now the union steward. If she wanted to know how to do something she would either pick someone’s brain to learn how or she would read a book or take a class on how to do it. She taught herself how to decorate cakes and then took lessons to become better. She made many beautiful cakes for friends and relatives. She was an accomplished seamstress. She sewed her wedding dress and all the dresses for her wedding party. Many years later she wanted to learn to tailor clothes and took a class and became very good at tailoring jackets and pants. She decided she wanted to learn to make draperies, so she worked for free for months learning from a business. She made beautiful custom draperies. About 1983 she decided she was going to go to beauty school to learn how to do hair. She graduated from beauty school in 1984. She worked in several nursing homes and continued to cut hair for her family for many years. Wayne would always have her cut his hair even after the affects of Parkinson’s and dementia were getting worse because he wanted her to feel productive. She was 88 the last time she cut his hair. Doris lived in Ashland and Klamath Falls during her high school years. She met Wayne at Ashland High School and moved to Klamath Falls her senior year and graduated from Klamath Union High in 1951. She remained high school sweethearts with Wayne until they were married on September 16, 1954 and remained married for 67 years when Wayne passed away. Doris did many things in her life. In high school she was a Majorette. She was active in the Methodist Church and was a Sunday School teacher. She was a girl scout leader for 5 years, she was a 4H club leader, started a newspaper club at Bellview Grade School in Ashland and acted as the editor and publisher. She was treasurer of the Belview School PTA for several years. She was an organizer of family reunions, class reunions, anniversary parties and weddings. She never hesitated to prepare food or decorate cakes for any occasion. She enjoyed sewing, painting, ceramics and crafts. She hiked, danced on roller skates and always cooked holiday and birthday dinners. In high school she worked in two different movie theaters and several restaurants as a cook, a car-hop and a fountain girl. She worked in the operations department of several different banks and in the 1980s she worked as a bank teller in the Portland area. She was the Ashland City Recorder in the early 60s. She worked as a school cook for the Lake Oswego School District, in the gift wrap and the credit department of JC Penny. She owned Doris Wiley Draperies and co-owned Lily Pad Craft & Sewing Store. Her last job was as a field office receptionist and secretary for Todd Construction. She never had trouble getting a job or finding something to do. In later years Doris and Wayne traveled both nationally and internationally. They loved going on the Rain Dance Tour bus to various places in the USA. Doris and Wayne enjoyed being snowbirds for several years and spent several winters in Palm Desert. Eventually they decided a condo in Hawaii for several weeks was better than a couple months in a motorhome. Later in life Doris was diagnosed with Parkinson’s and the dementia that can come with it so the traveling stopped. Wayne was always her true love and always said “we’ve been together for a long time and we will see it through til the end” and Wayne did. After he passed her family made sure she was taken care of and able to stay in her home. The end has come and she is together again with her high school sweetheart. She was preceded in death by her husband of 67 years, Wayne. She was also preceded in death by and her oldest granddaughter Bonnie Billings, her parents, 3 brothers (Jimmy, Johnny and Victor James) and 3 sisters (Rose Mae Ash, Betty Robinson and Francis Elliott). She is survived by her three daughters, Susan Calhoun, Patty Billings (Tim) and Chris Dovci (Jeff) and Lester Calhoun. She is also survived by 6 grandchildren (Jessica, Brianna, Joey, Emilee, Jon and Mike), one brother, Larry James and 3 sisters, Helen Clark, Pam Todaro and Jackie Banuelos and many nieces and nephews. The family would like to thank Asante Hospice for the kind and loving care they gave Doris in her final months.

Doris Anna James was born in Trinidad, Colorado on April 30, 1932 to Anna Kufner James and James Burrough James. She passed at home in Phoenix, Oregon on March 19, 2022. She was the 2nd of 11 children. Doris loved all her family very much... View Obituary & Service Information

The family of Doris Wiley created this Life Tributes page to make it easy to share your memories.

Doris Anna James was born in Trinidad, Colorado on April 30,...

Send flowers to the Wiley family.