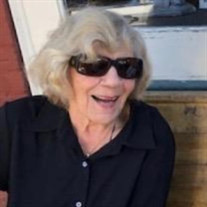 Elouise Friedberg passed away peacefully at 7:30 a.m. January 17 as a result of a stroke she experienced a few days earlier. Although the stroke left her in a condition that was not tenable to sustain life, her mind was fully aware. She was receiving her final care at Ashland Hospital in Ashland, Oregon, where her family sat with her. In her final days, they were able to share memories and thoughts with her. She was 104. Elouise was born on July 3, 1917 to Maurice and Carrie Enger in Morris, Illinois, the second in a family of eight children. She met her husband-to-be, Bernard Friedberg, at a dance in a park pavilion where traveling big bands played. Barney lived 20 miles away in Yorkville. Elouise loved to sing and had a wide repertoire of songs from the 1940s, including “It Had To Be You,”“Peg O’ My Heart,” “I’ll Be Seeing You,” “As Time Goes By” (from Cas-ablanca), “Tea for Two,” and many more. Her husband Barney accompanied her on the piano. In 1948 Barney and Elouise and their two young girls (6 and 2) moved to Burbank, California. Elouise was hired as secretary to the head of the newsroom at KNX-TV, the local CBS station and participated in the very early days of television news in Holly-wood. Back in Chicago in the mid-1950s, Elousie got a position in the news division of WBBM-TV, the CBS affiliate in Chicago. As secretary to newsman Bill Gary, she was sent out on assignments, wrote news stories, and met many notable people including Lowell Thomas. When they were not busy working or playing music, Elouise and Barney enjoyed going to the racetrack. They became race horse owners, often celebrating in the winners’ circle. After Barney died in 1985, Elouise took over the Friedberg Insurance Agency he had operated. A few years later Elouise met Freddie Reid when they were paired on a blind date to make a foursome for a game of golf. Elouise and Freddie began a relationship that lasted until his death in March, 2005. In 2017 Elouise moved to Ashland, Oregon, where she lived very close to her daughter Kay and son-in-law Jerry Stein. She is survived by her daughters Joan and Kay. In lieu of flowers, donations may be made in memory of Elouise to St. Jude Children’s Research Hospital. https://www.stjude.org/donate/donate-to-st-jude.html?

Elouise Friedberg passed away peacefully at 7:30 a.m. January 17 as a result of a stroke she experienced a few days earlier. Although the stroke left her in a condition that was not tenable to sustain life, her mind was fully aware. She was... View Obituary & Service Information

The family of Elousie Friedberg created this Life Tributes page to make it easy to share your memories.