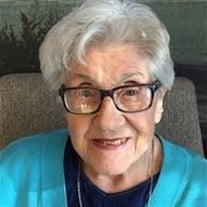 IN MEMORIUM Estelle Abel November 8, 1921 – December 29, 2019 Estelle Abel, 98, died at her home in Ashland, Oregon on December 29, 2019. She was surrounded by her family and friends. She is survived by daughters Louise Abel and Madeline Abel-Kerns, son-in-law Brian Kerns, and her amazing friends and relatives all over the world. Estelle was born on November 8, 1921 in New York City. She grew up in Brooklyn, New York spending time reading, going to the movies or to big band shows. She sang on the radio and in 1936 attended Brooklyn Vocational High School where she excelled at all her studies focusing on cosmetology. Estelle met Victor Abel in 1938 at their favorite hangout: the Sugar Bowl. They spent time together at the opera, foreign films, Broadway plays, and more. In 1947 they married, packed the car and moved to San Francisco. They spent many years in California opening their home to friends, family and surrogate children, who spent many hours singing around the piano. In 1989 Victor & Estelle moved to Oregon where they enjoyed many years in the Rogue Valley, making even more friends and participating in various local activities. In April 2006, after almost 60 years of marriage, Victor passed away. Estelle not only made friends wherever she went, she was also talented and creative in many fields. She was a singer, a seamstress, a knitter, a watercolor painter, a potter, a dedicated swimmer, a story teller, and especially an amazing baker. Estelle was not only a force of nature, she was indomitable, irrepressible, and seemingly indestructible; she was mother to us all and a friend to so many. She will be greatly missed... The Abel family would like to express their heartfelt appreciation to their special friends and to the caregivers for their support in making the journey of Estelle’s passing a remarkable one. Donations may be made in her name to Havurah Shir Hadash and/or Temple Emek Shalom, both of Ashland.

IN MEMORIUM Estelle Abel November 8, 1921 &#8211; December 29, 2019 Estelle Abel, 98, died at her home in Ashland, Oregon on December 29, 2019. She was surrounded by her family and friends. She is survived by daughters Louise Abel and Madeline... View Obituary & Service Information

The family of Estelle Abel created this Life Tributes page to make it easy to share your memories.

Send flowers to the Abel family.