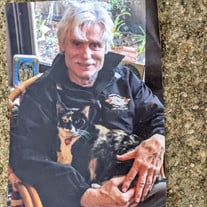 Francis (Frank) Patrick Carroll left this world on July 13 after a long illness. A resident of Ashland, Oregon since 2015, he lived and worked in many places around the world in his work as a water development specialist and environmental engineer in developing countries, including Iran, Egypt and sub-Saharan Africa. Frank was born in Queens, New York in 1948, the son of Adele and Frank Carroll. With his father, he was a fan of the Brooklyn Dodgers and developed a lifelong passion for baseball. He was a talented player himself in national adult leagues. Every year he looked forward to attending the league’s world series in Phoenix, Arizona. Frank was a brilliant and popular student. He attended high school in Fayetteville, New York, where he was a thespian, athlete and class officer, and remained close friends with his graduating class of 1966 throughout the decades. He was a Phi Beta Kappa graduate of Stanford University, and earned a Ph.D. in Energy and Resources from the University of California at Berkeley. He settled in Berkeley, where he bought and renovated a 1906 house where he lived for most of his adult life. Frank was a fun-filled and generous man who loved life, his friends and family, and his partner of 30 years, Janet Sonntag, a writer and editor. Their adventures together were many, from scooter cycling through rainstorms in Vietnam to voyaging in a felluca up the Nile River. In Ashland, they bought a house by a pond and created a beautiful garden. They met in 1990 when Janet answered an ad for a pet sitter for Frank’s dog Piglet and cat Flake, talked for four hours and Frank cut a yellow rose from a bush in his garden to give to her. Throughout his life, Frank was a passionate advocate for animals. In addition to his partner Janet, Frank is survived by his brother and sister-in-law, Lee and Jackie Carroll of Kirkville, New York, and their children. A memorial website in his name can be accessed at Forever Missed.com Frank Patrick Carroll. (Donations in his name can be made to The Alzheimer’s Association, The Humane Society , ASPCA, the World Wildlife Fund, or similar organizations.)

Francis (Frank) Patrick Carroll left this world on July 13 after a long illness. A resident of Ashland, Oregon since 2015, he lived and worked in many places around the world in his work as a water development specialist and environmental engineer... View Obituary & Service Information

The family of Francis "Frank" Carroll created this Life Tributes page to make it easy to share your memories.

Francis (Frank) Patrick Carroll left this world on July 13 after...

Send flowers to the Carroll family.