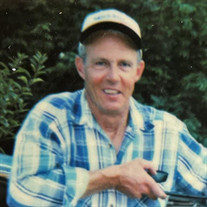 Fred Scott Baumgartner, 78, Ashland died October 14, 2021 at Rogue Regional Medical Center of causes related to age. Mr. Baumgartner was born April 7, 1943 in Portland, OR a son of Fred Clyde & Virginia Hoogduin Baumgartner. He was raised and educated in Hillsboro, OR. On June 7, 1963, he married Pearl Rilling in Hillsboro, OR and were married for over 58 years. Both Fred and Pearl graduated from Hillsboro High School in 1961. Fred & Pearl moved to Ashland and still reside in their original home they built in 1965 on land located south of Ashland. As a young man he worked on the family farm, had a paper route, local service station where many automobiles were repaired or modified. He then attained full time employment with Hillsboro Argus Newspaper where he trained & learned offset printing press operations for the daily newspaper and inserts. In 1963 Fred was hired by Ed Roundtree the original owner of the Ashland Daily Tidings to install and operate the first new offset press in southern Oregon manufactured by the Goss Mfg. Co. He eventually became Press Forman during his tenure working collectively with Judy Van Blarcom, Eva Morgan and several Publishers over the years. During his working life Fred also worked for Gandee Printing Medford, Valley Web Printing Medford, Bellview Molding Mill Ashland, Medinger Construction Ashland and his last place of employment before retiring was at Southern Oregon University Print Shop in Ashland. Fred had a mechanical aptitude and an eye for perfection in anything he put his hand too including additional building projects and maintenance on the property. This was passed on to his two boys and those that were associated with Fred. As a husband and father, he was dedicated to providing for the family and had interest in anything his boys participated in. Many hours were spent supporting Ashland Little League, Bellview Halloween Carnival/Spook House and Ashland School District Sports. Fred also served the small rural area south of Ashland as a Volunteer Fire Fighter for Barron Rural Fire District in the 60’s that later became Talent Rural Fire District and eventually Jackson County Fire District #5. Fred served on the Civil Service Commission, Budget Committee and in 1997 continued to serve on the Board of Directors for many years seeing through the replacement of the Main Fire Station #1. Fred also served the Oregon Fire Service assigned to different committees for Special Districts Association of Oregon and Oregon Fire District Directors Association. Fred was also an avid outdoorsman enjoyed hunting and fishing. Fishing became his outside activity passion during his mid and later years. He also built his own drift boat for river salmon/steelhead fishing. Fred is survived by wife Pearl Baumgartner, sons Chris (spouse Sarah) of Roseburg & Bryan Baumgartner of Central Point, granddaughter Hayley Baumgartner of Eugene, Grandsons Tanner of Astoria, Cayde & Reed Baumgartner of Roseburg. He is also survived by sister Diane Woff of Hillsboro. A celebration of life will be held at JCFD#5 Fire Station #1, 5811 S. Pacific Hwy, Phoenix, OR on November 6, 2021 at 2pm. Any memorial contributions can be made to Fire House 5 Foundation, PO Box 1401 Talent, OR 97540.

The family of Fred Scott Baumgartner created this Life Tributes page to make it easy to share your memories.

Send flowers to the Baumgartner family.