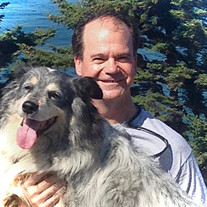 Galen Charter Whipple May 28, 1965 – December 8, 2019 Galen knew and loved many people and, if you were lucky enough to be one of those people, it might seem inconceivable that he’s no longer alive. Even after he self-diagnosed his own brain tumor (which was a very Galen thing to do), and willingly endured torturous treatments in an attempt to beat a Stage 4 melanoma, his death—of complications from his cancer treatment, at age 54, on 8 December 2019—was a shock. Because Galen was one of those people who always seemed indestructible. Galen was born in Singapore in 1965—the fifth of sixth children born to Rich Whipple and Petey Young (and one of the first to have an entire middle name). He spent his childhood in Ethiopia and in various parts of the U.S.—CA, WI, and NY—before moving as an adolescent to Ashland, OR. His childhood travels were emblematic of an inquisitive, searching, endlessly curious and creative mind. Galen’s intellect was dazzling, and restless. He dropped out of high school; graduated from Reed College; studied oceanography at the University of Washington; earned a Master’s degree in Chemistry from the University of Colorado; received a teaching degree from Southern Oregon University; and—after a couple of years teaching at the same high school in Ashland that he’d once dropped out of—completed his education by obtaining an M.D. from the University of Minnesota. Consequently, he pursued his medical practice in Alaska, California, and Oregon—most recently as a primary care physician at Curry Community Health in Brookings, Oregon. Galen was not only incredibly smart, he was also intensely physical—strong and fast and dexterous. He was a gifted soccer player; he enjoyed hiking and kayaking; and, because he also loved to travel, he went on idiosyncratically epic bike rides overseas. Galen was avid about sports more generally (he was a die-hard Patriots fan since 1974—which, he liked to emphasize, was way before they were any good). He loved to work with his hands, especially on self-styled projects that allowed him to indulge his creative problem-solving and mechanical skills, and his zeal to make things better. (His small collections of practical homes and impractical cars—including an Alfa Romeo and a Mustang SVT Cobra—provided endless opportunities for inventive tinkering.) And if you asked about any of those projects, or about anything that he might know something about (which was practically everything), you could count on him to respond generously, in great enthusiastic detail. If you knew him, you know that Galen sometimes needed to be left alone; but you also know that he was gregarious and giving and affectionate. Galen cared deeply for his family, friends, co-workers, and dogs. He had an unusual—perhaps surprising—capacity for patience. And he was extraordinarily, breathtakingly generous. He had, right up until the second it stopped working, a huge, huge heart. Galen is survived by many people who loved him deeply, including his mother, Petey Young, his brothers Miles (Kay Milligan), Derek (Annette Quayle), Kelin (Darla), Chris (Hazel Simon), his sister Quincy-Robyn Young (Mark Schaller), and half a dozen nieces and nephews (Grace, Brian, Teagan, Daryn, Jasper, and Maddox). They, and the many other people who were also lucky to know Galen and to be touched by his unique impact on their lives, will miss him terribly. A celebration of Galen’s life will take place on Sat, Jan 4, 2020 from 12:00 – 3:00 pm with a program at 1:00 at Ashland Hills Hotel, 2525 Ashland St, Ashland, OR. Hotel room discount is available – mention this event. Like Galen, the celebration will be casual. In lieu of flowers, please consider making a donation to Juvenile Diabetes Research Foundation or Fred Hutchinson Cancer Research Center.

Galen Charter Whipple May 28, 1965 &#8211; December 8, 2019 Galen knew and loved many people and, if you were lucky enough to be one of those people, it might seem inconceivable that he&#8217;s no longer alive. Even after he self-diagnosed... View Obituary & Service Information

The family of Dr. Galen C. Whipple created this Life Tributes page to make it easy to share your memories.

Send flowers to the Whipple family.