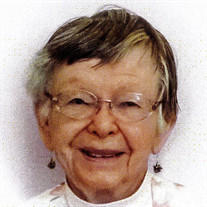 Grace Jean Walker was born on Sunday, January 20, 1924 in Visalia, California to William C. and Mildred C. Rothermel. “Jean” lived with her family in Kingsburg, California for most of her childhood. Fond memories included swimming with her brothers in the irrigation canals that dotted the surrounding farmland in Central California, and vacationing at their family cabin at Huntington Lake. In her early teens, Jean and her family moved to Oceanside, California where she attended the local schools including Oceanside-Carlsbad High School. When she was 27, she met the love of her life, Paul, and they were married on September 15, 1951. Paul was blessed with becoming the father of Jean’s three children from a previous marriage, Robert, Barbara and Christine. Jean subsequently quit her job as an operator at the telephone company and became a full-time homemaker. Jean and Paul were blessed with three more children: Paula, Gary and Mark. Jean, Paul and their family lived in Carlsbad, California for several years. Jean was an active member of Carlsbad Union Church. Special memories for her during this season of life included vacations with family to their mountain retreat in Idyllwild, California and enjoying the day to day activities of her family. After Paul’s retirement, he and Jean moved to Ashland, Oregon where they resided for 19 years. During this time, they were active members of Ashland Bible Church where they formed close friendships and were blessed with cherished memories. As Jean and Paul’s needs grew greater due to age, they moved to the Portland, Oregon area to be closer to their daughter, Paula. It was there that Jean lived the remainder of her years. She is survived by her children: Robert Walker, Barbara Monreal, Paula Johnson, Gary Walker, and Mark Walker; five grandchildren, nine great-grandchildren and two great-great grandchildren; son-in-law Brad Johnson, daughters-in-law Lauri Walker and Gulya Walker, and several nieces. We will miss Jean greatly, but rejoice in knowing that she is with the Lord and reunited with her beloved Paul.

Grace Jean Walker was born on Sunday, January 20, 1924 in Visalia, California to William C. and Mildred C. Rothermel. &#8220;Jean&#8221; lived with her family in Kingsburg, California for most of her childhood. Fond memories included swimming... View Obituary & Service Information

The family of Grace Jean Walker created this Life Tributes page to make it easy to share your memories.

Send flowers to the Walker family.