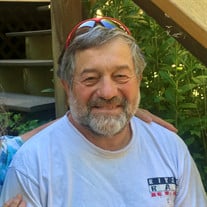 On July 1, we lost a good man, a good husband, a good father and grandfather, and a good friend. Dr. Gregory (Gregg) Walter Gassman, beloved educator and loving husband to Pat, passed away, after a hard and courageous battle with cancer over three years. He leaves behind Pat, his soulmate of 30 years; daughters, Rachel Gabriel and Thalia Thomas; and grandchildren, Zach and Sy Villa. Gregg was born March 9, 1950, in Plattsburg, Missouri. He thrived in a large family raised by Frank and Jean Gassman (who preceded him in death), and seven siblings - Kathy, Mike, Peggy, Tricia (deceased), Tim, John, and Patrick, and is survived by numerous nieces and nephews. Gregg graduated from Plattsburg High School in 1968. Never considered a valedictorian or salutatorian, he was an honorary member of the Glee Club ;-). After graduating, he attended NYU for a year, forging a tight bond with his great-uncle Remi Gassmann, famous musician and composer. He returned to Kansas City, and attended the University of Missouri - Kansas City, graduating with a degree in education. He worked for the Kansas City School District as an evaluator. He then taught for eight years in Alaska in the villages of Newhalen and Venetie, and credited that experience with enabling him to focus on teaching to the student as a creative individual, with all students having potential. This newfound philosophy would shape how he embraced education the rest of his life. After teaching in Alaska, Gregg went to graduate school at Utah State University and earned a Ph.D. in Special Education in 1995. And most importantly, it was there he met his life partner, Pat. They were married on July 31,1992. He and Pat moved to Alamosa, Colorado, where he taught for four years as a faculty member of the School of Education. They made many friends, having fond memories of rafting down the Rio Grande and Colorado, and singing and playing music with friends in the infamous ‘Last Chance Band’ get-togethers. In 1998, they moved to Ashland, Oregon, where he joined the faculty of Southern Oregon University, and taught for 22 years, becoming Professor of Education and Coordinator of Special Education. His influence on hundreds of students, surrounding communities and education, as a whole, was significant. Gregg’s central philosophy and legacy that all students have potential permeates through the schools where his students now teach. In addition to his numerous educational achievements were his personal contributions. Gregg volunteered his time and energy to the Downs Syndrome Association, education outreach programs in Jamaica, and was on the Ashland Food Project board. Gregg also helped film and produce the “Green Bag Solution.” Gregg was a volunteer ski patrol member at Mt. Ashland Ski area, where he was presented the Don Smith award for “Best Rookie” during the 2017-2018 ski season. Gregg famously found time for many recreational activities, hobbies, and interests. Besides skiing, rafting, scuba diving, and golfing (“Come on Buddy”), Gregg was well known for his construction and handyman skills. Never was a friend left in need when a home project or repair involved Gregg’s assistance. Gregg had a lifelong love for his hometown Kansas City Chiefs and Royals, and found great joy in the recent Chiefs’ Super Bowl victory, especially after having attended the first Super Bowl in 1967. As if this wasn’t enough to fill a life, Gregg became an ordained officiant in the Brotherhood of the Dudes, and presided over the wedding of his brother Tim and wife Parke last August. One truly must abide. Throughout Gregg’s fight with cancer, he not only endured, he refused to let it keep him down. Just days before his death, Gregg and Pat completed a 7-day raft trip down the San Juan River in Utah with a tight-knit group of friends. Through it all, Gregg lived up to his creed that he shared with all - “I’m gonna live until I die.” And indeed, he did. *The Celebration of Life for Gregory Gassman scheduled for October 10th, 2021 has been postponed until further notice.* The family requests in lieu of flowers, donations may be made in Gregg’s name to the Ashland Food Project, 2305 Ashland Street, Suite C PMB #447, Ashland, Oregon 97520 (ashlandfoodproject.com).

On July 1, we lost a good man, a good husband, a good father and grandfather, and a good friend. Dr. Gregory (Gregg) Walter Gassman, beloved educator and loving husband to Pat, passed away, after a hard and courageous battle with cancer over... View Obituary & Service Information

The family of Gregory Gassman created this Life Tributes page to make it easy to share your memories.

Send flowers to the Gassman family.