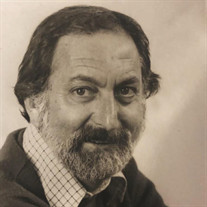 Herman Edel passed away on August 13, 2021 in Ashland, Oregon at the age of 95. He is survived by his wife of 63 years, Mardie Edel as well as his son, Scott, daughter in law Gillian, and three grandchildren, Alexandra, Nicholas, and Elizabeth Edel. He is also survived by his niece, Diane Edell. He was predeceased by his daughter, Margot Anderson in 1998. Herman was born and raised in Brooklyn, New York by Jewish immigrants from Iasi, Romania. He attended Brooklyn Technical High School, graduated from Brooklyn College, and received a Master’s degree from Hunter College. From there, he had a long and successful career in the music, film, and advertising industries. In the early 60’s he started his own advertising music production company in New York, producing some of the most iconic jingles of that era. In 1970, he and Beatles producer, George Martin, formed Air-Edel, the first advertising music production company in London, which is still in business today. In the early 1970’s, he moved with his family from Scarsdale, New York to Aspen, Colorado. Herman later served two terms as the Mayor of Aspen where he was instrumental in organizing a significant restoration of the Wheeler Opera House and led early efforts at building affordable housing. His commencement address at Scott’s Aspen High School graduation in 1978 remains a cherished memory. A founder of the original synagogue in Aspen, then located in the Methodist Church, he secured its first Torah from an organization in London that rescued Torahs from the Nazis during World War II in Prague and the surrounding area. That Torah remains at the Aspen Jewish Congregation to this day. He later wrote a historical novel entitled The Pavlac Legacy, which was inspired by the history of these Torahs and his journey in securing one for the Aspen synagogue. In the 1990’s Herman and Mardie moved to Ashland, Oregon, and LaQuinta, California. Throughout this time, he devoted himself to writing books and directing theater. He hosted a long running radio program called “On With The Show” about musical theater for Jefferson Public Radio, in Ashland. Together with Mardie, they contributed their time and resources to many charitable endeavors, including Audio Description for the Blind for the Oregon Shakespeare Festival, Retinitis Pigmentosa Foundation, Recordings For the Blind, The Margot Anderson Brain Restoration Foundation, and Juvenile Diabetes Research Foundation. Throughout his life and in their many homes, Mardie and Herm were beloved for their generosity. Whether a birthday party, anniversary, religious holiday, or just for a game of bridge, Mardie and Herm always threw amazing, memorable parties and loved to open their homes to a wonderful and eclectic group of friends and family from near and far. Just a week prior to his passing, friends and family had gathered for Mardie’s 90th Birthday Party, allowing many to see Herman and say goodbye. In lieu of flowers, the family would appreciate donations in Herman’s honor to Juvenile Diabetes Research Foundation, Southern California Chapter, Centralized Mailing Process Address, JDRF, 3001 Metro Drive, Suite 100, Bloomington, MN 55425.

Herman Edel passed away on August 13, 2021 in Ashland, Oregon at the age of 95. He is survived by his wife of 63 years, Mardie Edel as well as his son, Scott, daughter in law Gillian, and three grandchildren, Alexandra, Nicholas, and Elizabeth... View Obituary & Service Information

The family of Herman Edel created this Life Tributes page to make it easy to share your memories.

Send flowers to the Edel family.