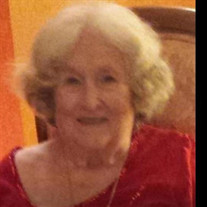 Lorrraine Whitten, a longtime social worker, volunteer and supporter of local theater, music and arts — and the granddaughter of Oregon Governor and Congressman Walter M. Pierce — died recently at her home in Ashland, where she lived alone. She was 83. Born and raised in Portland, Whitten loved world travel, arts and French cuisine, and she became a masterful cook and seamstress, always dressing in high fashion, say friends and relatives. She moved to Ashland about 1974 and volunteered at Elderhostel, Ashland library and the Chamber of Commerce information booth in the Plaza. She adored the Oregon Shakespeare Festival and could recite every play by heart, said her cousin Sally Stadelman. She also sewed costumes for the State Ballet of Oregon in Ashland. Whitten was the daughter of Edith Whitten, the fourth child of Gov. Pierce and his wife, Laura. When Laura died of cancer in 1925, Edith stepped into the role of First Lady at state events, said close friend Rosemary Ralston. His one term ran 1923 to 1927. When her husband died, Edith moved in with her daughter on Church Street in Ashland, living there many years. Whitten graduated from Grant High School in Portland and University of Oregon, worked for the USO in France and lived and worked in Washington, D.C., and San Francisco, said Ralston, who had a wine shop, Cheshire Cat, on Guanajuato Way in the 1970s. “She was passionate about French cooking and helping care for my children and would assist in my catering,” said Ralston. Democrat Pierce, an Illinois native, was a farmer and educator, with a political career in Oregon that stretched decades, from 1886 to 1942. He died in 1954, in Salem, when Whitten was 17. Pierce started teaching with only a high school education when he was 17. He married a student, Clara Rudio, and when she died in childbirth after three years of marriage, he married her sister Laura, in 1893. She had five children, including the mother of Whitten. Pierce earned his law degree at Northwestern University and, after stints as school superintendent and county clerk, Pierce in 1902 got elected to the Oregon Senate. He was a strong prohibitionist, but his temperance legislation failed and he was beaten at the polls in 1906. He founded the Oregon Farmer’s Union and the Public Power League, which led to Columbia River hydroelectric. As governor, Pierce signed the Compulsory School Act, requiring all children to attend public schools. It was seen as anti-Catholic and anti-Semitic and he was named in the landmark Supreme Court case, Pierce vs. Society of Sisters. It ruled the law in violation of the 14th amendment, stamping compulsory public education as illegal. Pierce fought for a state income tax, reforestation and prison reform and won a U.S. House seat in 1932 in the landslide election for Franklin Roosevelt. He was a strong New Deal supporter, serving five terms, and suffering defeat at age 81. “I had an amazing grandfather, very well versed and educated,” said Stadelman. “I have a book of all his speeches. He was a good friend of FDR and had a lot to do with getting the nomination (in 1939) of William O. Douglas to the Supreme Court.”

Lorrraine Whitten, a longtime social worker, volunteer and supporter of local theater, music and arts &#8212; and the granddaughter of Oregon Governor and Congressman Walter M. Pierce &#8212; died recently at her home in Ashland, where she lived... View Obituary & Service Information

The family of Janet Lorranine Whitten created this Life Tributes page to make it easy to share your memories.

Send flowers to the Whitten family.