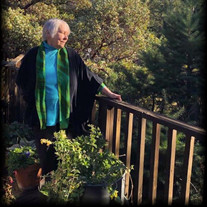 Jean Tangren Alexander 10/22/40–03/26/21 Jean Tangren Alexander, of Ashland, Oregon, 80, died peacefully at home on March 26, 2021 surrounded by friends and family. Philosopher, poet, writer, doll artist, lesbian pioneer and icon, she was also a beloved mother, sister, aunt, companion, and friend, known for her generosity. Tangren’s life has been an amazing journey and she proved to be as much a master of the art of dying as she was of living. Tangren was born October 22, 1940 in Medford, Oregon and raised by her parents Chester & Jessie Fitch in Ashland. She received her B.A. in philosophy from Lewis & Clark and became the first woman to receive a Ph.D in Philosophy from the University of Oregon (1975). She was married to faculty colleague John Alexander. The couple separated in the'70s, but remained lifelong friends. Tangren was a popular and innovative Professor of Philosophy at Southern Oregon University (then SOSC) from 1974-2006, and later expanded into Women’s Studies, helping to develop cross-disciplinary courses. She was an inspiration to her students, many of whom became lifelong friends. Tangren left behind a voluminous amount of writing, published and unpublished. She was a co-founding member (1981) of the Southern Oregon Women Writers' Group, which continues to this day. She was especially devoted to writing about the actor Deborah Kerr, her muse and icon from her early teen years until her final months of life. Tangren will be sorely missed by her daughter Marcella, ex-husband John; brothers David, Donald, and Michael; niece Kimberly; sisters-in-law Socorro, Athena, and Irene; great nephew Chester; and a wide circle of friends who loved, cherished, and admired her dearly. Tangren chose natural burial and was buried in a private ceremony on April 1. A Celebration of Life will be announced Summer 2021. To honor Tangren's wish that her writings be preserved, the Jean Tangren Alexander Literary Fund has been set up at Umpqua Bank in Ashland, as well as a GoFundMe page under the same name. Your gift will help archive her writings at SOU and the U of O.

The family of Jean "Tangren" Alexander created this Life Tributes page to make it easy to share your memories.

Send flowers to the Alexander family.