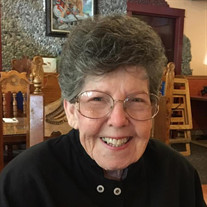 Joyce Ann Dickinson died in her home at Suncrest Place in Talent, Oregon May 10, 2020. Before moving to Suncrest, she lived for nearly fifty years at 340 Wiley Street in Ashland. Joyce was born June 8, 1930 to Ted R. and Nettie (Sylvester) Barney in Dallas, Gregory County, South Dakota. The best of her childhood was spent with her three sisters and brother in the Black Hills. She had a life-long love of books and reading. After graduating valedictorian from Provo High School in Igloo, SD (the Black Hills Ordnance Depot), she attended Chadron State College. She interrupted her studies in 1949 to marry D. H. Dickinson and move to Oregon. Joyce returned to college and graduated cum laude from Southern Oregon State College in 1972. After graduation, Joyce taught elementary school in Eagle Point until her retirement. As an educator, she was a member of Delta Kappa Gamma Society, and took a particular interest in its scholarship program. Joyce and Dee were active in community projects through the Elks Club, including grants to families in crisis, youth club sponsorships and service projects. They built a cabin near Rocky Point on Klamath Lake where for years they graciously hosted extended family. The couple was blessed with two brave and talented children, Douglas and Denice, who died from cystic fibrosis at ages 15 and 34, respectively. It was fitting that Joyce joined them on Mother’s Day. After Dee’s death, Joyce reunited with her Chadron College sweetheart, Robert (Bob) Brown, a Nebraskan educator, whom she married in 1999. She fell in love too, with her new family: step-son Bill Brown and his wife Jane; grandson Greg Brown, his wife Staci and their daughters Eden and Ruby; granddaughter Stacie, her husband Will Goding and their daughter Charlotte; and step-son Boyce and grandson Brett Brown. With both Dee and Bob, Joyce enjoyed world-wide travel that included fourteen cruises. In addition to her parents, husbands and children, she was preceded in death by sisters and brothers-in-law, Nila and Herb Martin, Ruth and USAF Capt. A. D. “Bud” Callan, brother Ted R. Barney, sister-in-law Bev, brother-in-law Col. Robert “Red” Lachance, Ret. and BFF Lou Engle. She is survived by her sister Tedene Lachance, much-loved nieces and nephews, grand nieces and nephews, including Laura Martin, Ryan and Jennifer Beathe and Hannah Klopping, with whom she had special relationships, and many great-grand nieces and nephews.

Joyce Ann Dickinson died in her home at Suncrest Place in Talent, Oregon May 10, 2020. Before moving to Suncrest, she lived for nearly fifty years at 340 Wiley Street in Ashland. Joyce was born June 8, 1930 to Ted R. and Nettie (Sylvester)... View Obituary & Service Information

The family of Joyce Ann Dickinson created this Life Tributes page to make it easy to share your memories.

Joyce Ann Dickinson died in her home at Suncrest Place in Talent,...

Send flowers to the Dickinson family.