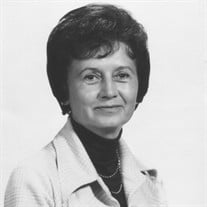 KATHERINE (KAY) MARGARET ALSING Feb 1, 1925 - June 15, 2019 Katherine (Kay) Margaret Rice Alsing, a descendant of Oregon pioneer families, was born Feb 1, 1924 in Roseburg, Oregon, only child of Marc E and Gladys Bounds Rice. Kay married Allen Arthur Alsing on June 7, 1953, and they lived together for 58 years on upper Walker Avenue in Ashland and spent many enjoyable hours at their 'quaint' cabin at Lake of the Woods which they shared with their many friends. A 3rd generation Oregonian, her great-grandparents were part of the first wagon train thru the Rogue Valley using the Applegate cutoff on their way north. She spent a large part of her childhood on her grandparent's homestead in Myrtle Creek along the Umpqua river. Kay has had multiple careers during her long lifetime. She graduated from Southern Oregon College of Education (SOU) and taught school in Ashland & Jacksonville. Pursuing her interests in Science, she trained in Medical Technology at University of Oregon Medical School (OHSU) in Portland, earned a Master of Science from Southern Oregon State College (SOU) and worked at Rogue Valley Hospital (Asante Medical Center) in the Medical Laboratory for 10 years. Kay was also an avid pilot who fell in love with flying the first time she took Al up on his offer of a gift of a 'bird's eye view of the valley'. Though she discovered flying in her late 40's, she became a charter pilot and a flight & instrument instructor, in both single and multi-engine planes, as well as a reconnaissance pilot for the Rogue River National Forest Service. Kay flew everywhere and whenever she could, and she shared this passion and trained many pilots in the Rogue Valley on various aircrafts. In 1975, she was named the Flight Instructor of the Year by the FAA for this area. Kay was also passionate about the arts - a founding member of a long-standing book club, taught piano at their home for many years, and was a supporter of the local Theater communities. She loved memorizing long poems and reading a wide variety of scientific publications. Kay died peacefully in her sleep on June 15, 2019 and was preceded in death by her husband, Al in 2011, and son, James Allen (Jaime) in 1994. A Celebration of Life for Kay will be held on Saturday, September 7, 2019 from 2-4 pm at Litwiller- Simonsen Funeral Home, 1811 Ashland Street, Ashland, Oregon. www.litwillersimonsen.com To honor Kay's memory, please do a random act of kindness for someone in need.

The family of Katherine Alsing created this Life Tributes page to make it easy to share your memories.

Send flowers to the Alsing family.