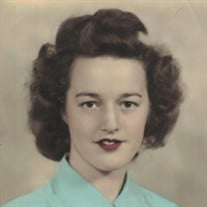 Laura Mae Taylor was born October 30, 1930 in Canton, Ohio, and passed away peacefully in her Central Point, OR home on August 10th, 2021. She was the 2nd of 4 children born to Arthur and Amanda (Miller) Telfer. Laura’s mother was born into an Amish family, so Laura grew up enjoying frequent visits to her family in the Amish country of Holmes County, Ohio. She graduated from Louisville High School in May 1949 where she played basketball and volleyball. At age 25, her father passed away and Laura stayed close to home with her mother to help assist in daily life. She often babysat her siblings’ children, taking them ice skating and making memories as a favorite aunt to her nieces and nephews. Laura worked for the Hoover Company until she met and married the love of her life, Herb Taylor. She moved to Southern Oregon in 1974 and became a part of the Taylor family, which included 3 stepdaughters Connie (Sam) Johnson, Brenda (Wayne) Inget and Terrie (Bob) Pearce along with ten grandchildren, many great grandchildren and great great grandchildren. Along with her new role in the family, Laura worked for Harry and David until she retired, and faithfully attended Living Praise Church where she became the bookkeeper for years. Laura loved long drives and going on trips to cut firewood, and she would often share that those were some of her favorite memories with Herb. She loved to get in on the action, and liked to ride on the three wheelers and participate in games & activities with her family and friends. She loved being outdoors, and was seen mowing her yard and tending her flower garden well into her late 80's. She is survived by 4 nieces and 6 nephews: Keith (Sally) Dean, Lisa (Greg) Pawley, Crystal (Jeffrey) Williams, David Swinehart, Larry Swinehart, Linda (Bob) Curtis, Mark Swinehart, Denise Kolakowski, Paul (Diane) Telfer, and Jonathan Telfer. As well as many great nieces and nephews. Preceding her in death is her husband Herb Taylor, her father Arthur Telfer, mother Amanda Telfer, her brother, Bob Telfer, her sisters, Dorothy and Helen. Wayne Inget (son in law) and Austin Dewey (great grandson).

Laura Mae Taylor was born October 30, 1930 in Canton, Ohio, and passed away peacefully in her Central Point, OR home on August 10th, 2021. She was the 2nd of 4 children born to Arthur and Amanda (Miller) Telfer. Laura&#8217;s mother was born... View Obituary & Service Information

The family of Laura M Taylor created this Life Tributes page to make it easy to share your memories.

Send flowers to the Taylor family.