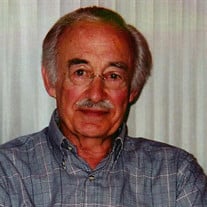 Dr. Leonard LeRoy Smucker passed away peacefully in Ashland, Oregon on Thanksgiving Day, November 28, 2019. He was born to J.N. and Mary (Lantz) Smucker on April 3, 1928 in Smithville, Ohio. After graduating from Bluffton College, he earned a Bachelor of Divinity degree at the Bethany Theological Seminary in Chicago and a Ph.D. in psychology at the University of Southern California (1959). On June 17, 1951, he married his college sweetheart Lois A. Rich Smucker (deceased July 26, 2019). In 1946, he volunteered as one of the “seagoing cowboys” on a cattle ship (SS Stephen R Mallory) transporting cattle and horses to war-torn Poland. From 1960 to 1963, he was a staff psychologist at Norman Beatty Mental Hospital in Westville, Indiana. Beginning in 1963 – and for most of his professional career -- he was a clinical psychologist at Oaklawn Psychiatric Center in Elkhart, Indiana. He published the book “Spring: A Therapeutic Relationship“ in 1967. In 1996, he volunteered as a trauma counselor in post-war Bosnia. He was known for his creativity, kindness and sense of humor. Nicknamed the “Wizard,” he enjoyed growing bonsai, unicycling while flying a kite, woodcarving, bee-keeping, baking prune-nut bread, raising crows, blacksmithing, making hats from paper shopping bags and playing flutes that he turned on the lathe or made from PVC pipe. In Ashland, he volunteered as a gardener at Lithia Park and often rode the bike trails on one-of-a-kind bikes that he designed and built from spare parts. Len is survived by his four sons Sterling, (Seattle), Stanford (San Francisco), Stuart (Portland) and Steve (and wife, Kimberly Smucker Cash, Portland) and two grandsons North and Leif. Len’s sister Mary Ann Unruh lives in Leawood, Kansas and his brother Joseph Smucker lives in Montreal, Quebec, Canada. A time and place for a celebration of his life has yet to be determined.

Dr. Leonard LeRoy Smucker passed away peacefully in Ashland, Oregon on Thanksgiving Day, November 28, 2019. He was born to J.N. and Mary (Lantz) Smucker on April 3, 1928 in Smithville, Ohio. After graduating from Bluffton College, he earned... View Obituary & Service Information

The family of Leonard LeRoy Smucker created this Life Tributes page to make it easy to share your memories.

Send flowers to the Smucker family.