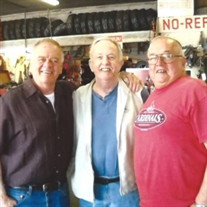 Lester Stephen Walker Passed at the age of 85 at Placid Circle Adult Foster Care Home on August 14, 2021 Born in Merrill, WI on August 4, 1936 to Adeline Conrad and Lester Charles Walker Moved to Talent, OR at the age of 5 Graduated Talent High School in 1954 Enlisted in the United States Army in 1955 and served 2 1/2 years in Germany. Upon returning home he went to SOC for one term where he met his first wife Toni Cote'. They married in 1960 and had four children, divorcing in 1970. In 1974 Les married Karen Lucas, she had two boys that he raised as his own, together they had one child. Les went to work at Sam Jennings Company as a sales rep in 1959 and spent 8 years as general manager. In January 1993 he went to work for Witham's Truck Center as a sales rep retiring in January 2004. Les was a 3 sport athlete, voted outstanding senior in football and baseball. All conference RB in football and played in the East-West Shrine football game as well as the co-state champion baseball team. He was voted Outstanding Senior by the Talent HS Faculty. In 2011 he was inducted into the Phoenix-Talent Athletic Hall of Fame. Les loved the outdoors, where he always made time for long camping trips. Hunting with his brothers and close friends was the thing he most looked forward to every year, and later involved his kids and grandkids. At any point in the year you could ask him how many days and he could tell you the exact number of days until opening day. Survived by children: Steve Walker(Donna) of Klamath Falls; Mike Walker (Caroline) of Medford; Dave Walker of Florida; Terri Walker of Eugene; Bryan Lucas (Anna) of Colorado; Brent Lucas (Kristi) of West Linn, Jake Walker (Veronica) of Alaska. Grandchildren: Matt, Josie, Bo, Jack, Nate, Whitnee, Jeffrie, Charlie, Joey, Rachel, Josh, Nathan, Mikah, Makenzey, Naylah, Keegan, Molly and Tucker and 6 great grandchildren. Sisters Sharon Lee (Richard) and Shirley Zeitler (Tom) and multiple nieces and nephew. Predeceased by parents and brothers Jack (Andrea) and Jim (Diana). Funeral arrangement being handled by Litwiller-Simonsen in Ashland. Memorial service will be held at Scenic Hills Cemetery on August 28th at 10 am.

Lester Stephen Walker Passed at the age of 85 at Placid Circle Adult Foster Care Home on August 14, 2021 Born in Merrill, WI on August 4, 1936 to Adeline Conrad and Lester Charles Walker Moved to Talent, OR at the age of 5 Graduated Talent... View Obituary & Service Information

The family of Lester Stephen Walker created this Life Tributes page to make it easy to share your memories.

Lester Stephen Walker
Passed at the age of 85 at Placid Circle...

Send flowers to the Walker family.