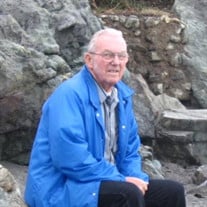 Lewis Edwin Spence, 91, of Medford, Oregon, passed away peacefully on Tuesday January 11, 2022, at Arbor Place in Medford. Lewis was born in Livingston, California to Jack and Susan Spence on February 24, 1930. He began driving truck for Nulaid in Merced, California in 1946. In March 1951, Lewis was inducted into the Army; wounded in action in October 1951. He served 18 months in Korea during the Korean War. Lewis received a Purple Heart and Combat Infantryman Badge. After his discharge from the Army, he returned to driving truck. Lewis married Goldean Middleton on January 3, 1955, later divorcing. Eventually, Lewis moved to Glenn County to operate a dairy and then onto Yuba City, California to drive truck. Lewis married Sandy Williamson, his loving wife of 57 years, on October 24, 1964, in Carson City, Nevada. They lived in Yuba City, California until 1969 when they moved to Covelo, California. In Covelo, Lewis was a rancher, worked at Louisiana Pacific and was a heavy equipment operator for the County of Mendocino Roads Department. In addition to all of this, Lewis hauled hay; taking time off from his “regular” job to work for local famers and ranchers. In 1981, Lewis suffered a brain aneurysm which eventually forced him to retire from the County of Mendocino. With his newfound independence, Lewis engulfed himself in raising sheep, hauling hay, bowling and following his son, Rick, around to different sporting events. Lewis was very active in the Covelo community, including overseeing the Covelo Recreation Center and Rodeo grounds for many years. In 2006, Lewis and Sandy moved to Medford, Oregon to be closer to family. His passion became babysitting his grandchildren and watching his grandchildren play sports. He rarely missed a baseball, softball, football, basketball or soccer game and was affectionately referred to as “grandpa” by many of those who attended the games. He will always be remembered for sitting next to the on-deck circle at baseball games, telling Monte to “hit it in the flat” as he went up to bat. Lewis enjoyed camping and visiting campsites with friends and family throughout the Oregon and Washington coast. Lewis was by far the hardest working person his family has ever known. He could build or repair anything and would always lend a helping hand. Lewis is survived by his wife, Sandy; son, Rick (Tamara) Spence; daughter, Linda Peters; grandchildren, Amanda Spence, Monte Spence, Gabrielle Spence, Wesley Spence, Kylie Spence, Ernie (Joe) Peters and Eric (Jennifer) Peters; great-grandchildren; Garrett Peters, Gerald Peters, Gillian Peters, Wyatt Peters and Marissa Peters; great-great-grandchild, Evelyn Valdez; sisters, Elaine (Harold) Shoeffler, Carol (Ivan) Leach and Judy Spence; brothers, Jack (Evelyn) Spence, Ray (Joan) Spence, Herb (Claudell) Spence and Dennis (Betty) Spence. Lewis is preceded in death by his parents; sons, Robert, Stanley and Monte; sisters, Frieda Bostick and Jeanne Ponciano; brothers Allen, Ron, Gary and Jimmy. Funeral services will be held at 11:00 AM on January 21, 2022, at F.D Sweet & Son Funeral Home in Willows, California with Father Sean Weeks of St Pius X Catholic Church and Father John Marshall of St John the Baptist Catholic Church, officiating. Burial will follow at Willows Cemetery. Arrangements are by Litwiller-Simonson Funeral Home in Ashland, Oregon and F.D. Sweet & Son Funeral Home in Willows, California. A viewing will be available from 9:00 AM to 11:00 AM on January 21, 2022, at F.D. Sweet & Son Funeral Home.

Lewis Edwin Spence, 91, of Medford, Oregon, passed away peacefully on Tuesday January 11, 2022, at Arbor Place in Medford. Lewis was born in Livingston, California to Jack and Susan Spence on February 24, 1930. He began driving truck for Nulaid... View Obituary & Service Information

The family of Lewis E. Spence created this Life Tributes page to make it easy to share your memories.

Send flowers to the Spence family.