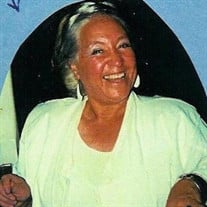 LILA MARGUERITE (PORTER) MACFARLANE A true saint has left us. Lila Marguerite (Porter) Macfarlane joined her loved ones for eternity on September 29, 2020 at 7:30 pm. Born in Klamath Falls, Oregon, on Feb. 22, 1927, to Merton and Cora Porter, Lila spent her childhood in Chiloquin. She was loved by many since childhood; and during high school she was voted Homecoming Queen. Back then, dances included whole families, and Chiloquin was a booming town. Her parents worked for the Klamath Agency and her father, a pipe-fitter, often traveled to other places for work. Travels included Montana on the Crow Reservation and Southern California where she enjoyed big band dances and meeting military men. One of her many legacies was her love of dance. Those who knew her always comment on what an amazing Jitter-Bug dancer she was. Raising 10 children left little time to pursue her love of dance and a desire to be a fashion designer. But, dancing with my father on weekends, and designing and sewing her own beautiful wardrobe sufficed. Her life was all about her children and family. She worked as a dental assistant, switchboard operation (at Klamath Agency), and receptionist for the U.S. Forest Service (Chiloquin, later Medford, then finally the Ashland district, where she retired). Lila loved to laugh, and was creative and determined. When she set out to do something, she did it, including building an amazing outdoor table on her own with a hand saw and hammer. She was also a gifted artist and attended OIT later in life. When her children were young, she used to do her jogging around their large home in Chiloquin while the children slept. She also practiced yoga for a time. After retirement, one of her favorite past times was searching for treasures at second-hand stores, eating out with her children – especially Chinese, and watching old movies and the Food and Disney channels. But her greatest legacies are patience, acceptance, and love. No one did it better. She always welcomed everyone and was there to help her children in any way she could; to listen to their problems and adventures; and to laugh at all their jokes and stories. Most weekends every floor space was taken by visiting children and grandchildren. And a big pot of soup was always on! She is preceded in death by her parents, Merton and Cora (Black) Porter, cherished sister Elizabeth “Betty” Neubert; brother, Albert “Sonny” Porter; grandson, Grant Ivan “Gib” Berry; granddaughter, Trina Macfarlane; great grand daughter, Angelica Jackson; Uncles Clifford “Buddy” and Sammy Black; Aunt Elsie (Black) Sanders; and many others. She has left behind 71+ descendants – including all of her ten children, whom she adored and lived for: Fred, David, Mark (Christie), Pete (Julie), Therese, Matthew (Michelle) and Mike (Hellen) Macfarlane; Julie Epperson; Katerie Moore; and Cora (Jim)Thompson. Also, our adopted sister, Nancy Blackwelder and California sister, Cate Markey Macfarlane. Special in-laws include Suzi Macfarlane, Shari Zinn, Bindu, and Susan Lowry. Grandchildren: (Macfarlane unless otherwise noted) Conner, Rachel; Travis, Tila Moon, Wendell, David Jr., Stephen “Scoobie” (Apple); Terry Bettles, Cameron, Thunder Atchley; Elisa; Charlie Hill; Nathan, Jared; Lila, Parker, Jordan (Erica); Chanel Gallagher; Steven, Harley, and Ainan Epperson; Allen, Tonna, and Tayla Moore, Aspen; Nichole Hommerson, Felisha Edens, Gavin Koenker; and four in Uganda who never had the honor of meeting her: Lubok, Eli, Eston, and Eden; and a multitude of adults who called her mum. Great Grandchildren: Taylor Jackson; Adrian Hernandez; BibiAnna, Joseph, TatiAnna, Corrina, and Joshua Lienau; Ky, Poshka, little Tila, and Percy Anne; Katona Macfarlane; Winsor, Percy, Uther Macfarlane; Amelia Macfarlane; Dillon, Athena and Derek Bettles; Jade and Mira Macfarlane; Austin Zuspan; Mya Palmer, Jaelynne Graeber; Willow Macfarlane; Naomi and Tessa Hommerson; Kamron, Kayden and Klaire Edens. Great Great Grandchildren: Anniah Martinez, Taylor Jr. and Tilina Jackson; Link Lineau. Nieces and Nephews: Diana and Doug McKeag (Ian, Kelly, Heather); Mert and Carla Porter (Britany, Tracy, Taylor, Kyndal); Bob Porter; Michelle Smith; Cheryl and Mike Groves, Sharene and Jim Mark (Richard); Tina and Pat Sullivan (Carissa, Lindsey). Cousins: Phyllis Wells and Donna Miller; Alaska cousins Randy & Marlene Black, Jim and Kathy Black; Rene’ Meza and many others. Her presence on this earth can never be replaced. We will miss her until we meet again. Arrangements by Litwiller-Simonsen Funeral Home, 1811 Ashland Street, Ashland, OR 97520. www.litwillersimonsen.com

LILA MARGUERITE (PORTER) MACFARLANE A true saint has left us. Lila Marguerite (Porter) Macfarlane joined her loved ones for eternity on September 29, 2020 at 7:30 pm. Born in Klamath Falls, Oregon, on Feb. 22, 1927, to Merton and Cora Porter,... View Obituary & Service Information

The family of Lila Marguerite Macfarlane created this Life Tributes page to make it easy to share your memories.

Send flowers to the Macfarlane family.