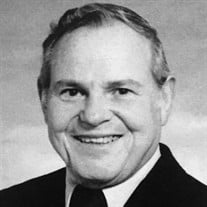 On April 25, 2020, Milton Rosen passed away with his beloved wife of over 66 years in his arms. His passing was peaceful, and he had enjoyed having many of his family members coming by to spend time with him in his final days. The family held a small service on Wednesday, April 29th, at Havurah Shir Hadash synagogue in Ashland, Oregon. Burial was in Jacksonville Cemetery. Milt was born in Philadelphia on October 2, 1931 to Russian emigrants, Morris Rosen and Annie Zazow. He attended Central High School where he not only excelled academically (his favorite subject was math), but played football and was equally proficient in all sports. Fellow classmates of the 1949 graduating class, noting Milt's sense of humor, hearty laugh, amiability and persistence, accurately predicted that he would find “nothing but success in the world”. Milt attended Temple University, later moving to California with his family. In 1953, he was awarded a Bachelor of Science in Pharmacy degree from the University of California San Francisco. Later he served in the U.S. Army, attaining the rank of 1st Lieutenant. Milt met the love of his life, Marlene Serelle Gould, in 1951 just after her sixteenth birthday. Marlene had an iron-clad rule about not kissing on the first date, but she made an exception for Milt. They were married on August 9, 1953 at the Beverly Chateau in Los Angeles. Their first son, Steven Michael (Rebecca) was born just before their first anniversary, followed by Mark Louis (Amy) in 1956, Gijai (aka Gary Jay) in 1957, Scott Allen (Barbara) in 1958, and then a baby girl, Wendy Lea Diamond, in 1960. Milt and Marlene bought their first home in Canoga Park in 1957. They moved to Sherman Oaks in 1962, where their children spent most of their growing years. Milt began his pharmacist career with Thrifty Drugs. Then, in 1961, he bought Bud's Drugs in North Hollywood, renaming it to Family Pharmacy. For the next 18 years, he earned a well deserved reputation for high quality, professional, and personalized service. He was truly loved and admired by all he served. When Milt and Marlene became empty nesters, they sold the pharmacy in 1979 and moved to Los Osos, California. Milt again worked for Thrifty's as well as several private pharmacies. Retiring in 2005, Milt and Marlene, relocated to Medford, Oregon to the Rogue Valley Manor. Milt loved the many dogs he had in his life. He would train each and every one of them to an impressive level. Milt so enjoyed his active lifestyle. He was an avid cyclist, an exceptional ping pong player, and a very enthusiastic water volleyball player. Milt was extraordinarily compassionate, serving many through his ombudsmen work and his involvement with the respite care program, Share and Care. He also started the Diabetic Support Group at Rogue Valley Manor, and was a founding member of the Whole Foods Plant Based Pot Luck Dinner Group. Milt is survived by his adoring wife, four of his beloved children, Steve, Mark, Scott, and Wendy, and his six precious grandchildren - Deborah Lee Rosen, Jacob Simon Rosen, Mitchell William Rosen, Valerie Breanne Rosen, Dana Melinda Rosen, and Grant Soren Rosen. Milt was preceded in death by his sisters, Genya Buryakovsky and Ruth London, and his middle son, Gijai. In lieu of flowers, the family would appreciate donations be made in Milt's honor to Southern Oregon Friends of Hospice at 217 S. Modoc Avenue, Medford, OR 97504 or to Havurah Shir Hadash at 185 N. Mountain Avenue, Ashland, OR 97520. The family extends their gratitude to all the staff and friends at Rogue Valley Manor who have been so supportive to both Marlene and Milt.

On April 25, 2020, Milton Rosen passed away with his beloved wife of over 66 years in his arms. His passing was peaceful, and he had enjoyed having many of his family members coming by to spend time with him in his final days. The family held... View Obituary & Service Information

The family of Milton Rosen created this Life Tributes page to make it easy to share your memories.

Send flowers to the Rosen family.