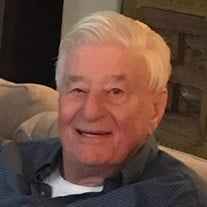 Morris Lee Stringer passed away at Celia's House in Medford Oregon on January 28,2022. He is preceded in death by his wife Maxine Stringer, daughter Tracy Kappell and granddaughter Leah Stringer. He was born to Ray and Leah Stringer on September 10, 1936 in Medford Oregon. Morris attended Ashland High School and married his high school sweetheart Maxine Champion January 29,1954. During high school Morris was involved in many activities: Football, Boys Club vice president, and he had a love for automobiles. He worked many jobs while going to high school: turkey ranch, gas station attendant and Varsity Theater in the projector room. After high school he went to work in the Lumber Industry. He worked for McGrew Bros. in the early 1960's loading box cars, driving hysters and eventually working his way into the office and becoming a superintendent. McGrew Bros. eventually sold to Croman Corporation who eventually closed the mill in the mid 1990's, so Morris retired. Morris was a member of the Ashland Elks for over 50 years and also belonged to International Order of Hoo-Hoo, a Fraternal organization of men in the lumber industry. Morris and Maxine moved to Medford in 1998. They were avid sports fans, and their teams were ASH Grizzlies, SOS Raiders and the Oregon Ducks. For over 50 years Morris and Maxine had season tickets for ASH and SOS football games. Morris knew no stranger; he could strike up a conversation with anybody. In his later years he enjoyed all his grandchildren and great grandchildren. He also enjoyed reading; sometimes reading two books a week. When Maxine passed on September 20, 2021, Morris was devastated. He tried to move on without his sweetheart of 68 years but died of a broken heart one day before their 68th anniversary. Morris leaves behind his daughter Jeri Stringer of Medford Oregon, his son Darrell[spouse Robin]Stringer of Tigard Oregon, his son-in-law Ray Kappell of Central Point Oregon. He is also survived by his sister Sally[spouse David]Everett and their two kids Andrea Anderson and Chad Everett, and sister-in-law Shirley[spouse Paul]Alley and their two son's Bill and Randy Alley. He also leaves behind his grandchildren Jessica Nash, Lindsay Kappell, Amber Bronken, Nick Kappell, Stephen Rodgers, Morgan Macias, and Nick McMullen, as well as his 12 great grandchildren Emily Nash, Lilly Nash, Luke Nash, Laney Nash, Kate Bronken, Beck Bronken, Owen Bronken, Brayden Poff, Isabelle Poff, Charlotte Hope, Madilyn and Ezra Rodgers and Avayah and Jacob Anthony Macias. There will be a private Celebration of Life this summer for family members only. Any memorial contributions can be made to the Ashland High School Booster Club.

Morris Lee Stringer passed away at Celia's House in Medford Oregon on January 28,2022. He is preceded in death by his wife Maxine Stringer, daughter Tracy Kappell and granddaughter Leah Stringer. He was born to Ray and Leah Stringer on September... View Obituary & Service Information

The family of Morris L. Stringer created this Life Tributes page to make it easy to share your memories.