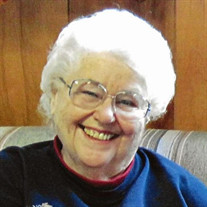 Nona Marva (Johnson) Hoadley, 89 of Ashland passed away Saturday, March 26, 2022. She was born September 27, 1932 to Robert E. Lee and Roberta Elma (Yule) Johnson in Sacramento, California. The family soon relocated to the Turlock area where her father turned his hand to farming after losing his job with the railroad due to the depression. They remained in the San Joaquin Valley until 1948 when the family again relocated to Williams, Oregon. Nona graduated from Grants Pass High School in 1950. Pursuing her dream to become a teacher, she enrolled at what was then the Southern Oregon College of Education in Ashland. Her dreams soon changed to raising a family when she met and married Lloyd Arthur Hoadley, the nephew of her employer. Lloyd and Nona made their home in Ashland and raised four children there. When the youngest started school, Nona again turned to education and became a teacher’s aide at Bellview Elementary School. Her passion to become a teacher was soon reignited and she once more enrolled at Southern Oregon College, earning her bachelor’s degree in education in 1969. She would eventually go on to receive a Master’s degree from the same school. After working as a substitute teacher for a year or two she was hired as a reading teacher at Helman Elementary School and would go on to become the school librarian and media specialist, a position she held until her retirement. She enjoyed travel, camping with the Good Sams, painting, reading, sewing, cooking and planning family gatherings. She also taught classes at Home Extension and was an active member of the Beta Sigma Phi. Nona is survived by three of her four children, Lois (Robert) Schroeder, Milwaukie, Oregon; Jeanne Hoadley, Talent; and Jerry (Eileen) Hoadley, Ashland. Also surviving are five grandchildren and seven great grandchildren. She was predeceased by her son Alan who passed away in 2014, her husband of 64 years, Lloyd who died in 2015, her younger sister Dorine DeVall who died earlier this year and four beloved dachshunds. Though she struggled with many physical limitations brought on by diabetes, heart disease, and old age, her mind remained sharp until the end. She was generous, almost to a fault. She loved children, flowers and dogs and she will be sorely missed by family and friends. No memorial service is planned at this time.

The family of Nona Marva Hoadley created this Life Tributes page to make it easy to share your memories.

Send flowers to the Hoadley family.