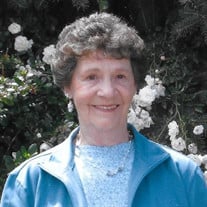 Rada Ann (Forga) Jackson Rada Ann (Forga) Jackson 79, passed away peacefully at Ashland Community Hospital on May 19, 2019 surrounded by her children. Rada Ann was born May 28, 1939 in Mt. Ida Arkansas to Edmon S. and Elsie Mae (Story) Forga. She moved to Oregon with her family in 1946. They settled in Lakeview, Oregon and Rada went to Lakeview High School, class of 1957. She married Alvas C. (Cook) Elliott Jr. in 1956. They had 3 children, Charles (Dobey) Elliott, Susan (Elliott) Collins and Larry Elliott. Rada was the Deputy Assessor of Lake County for 16 years where she made many lifelong friends. She and Cook owned and operated Lakeview Creamery from 1972 to 1976. Upon their divorce, Rada moved to Bend in 1976 and pursued her public service career as the Deschutes County Clerk. During that time she married Virgil V. Rutledge. Though the marriage was short they remained very close friends through their lives. She remained with Deschutes County for several years before moving on to Ashland, OR where her children resided. Rada went to work for the City of Ashland in 1981 as their cashier and there she met her future husband Earl Jackson. Earl and Rada were married in 1982. Their days were filled with love and laughter and together they built their 1957 Thunderbird. This was their passion. She retired from the City of Ashland after serving as court clerk working beside the Honorable Judge Allen Drescher. Rada spent her retirement years enjoying her Children, Grandchildren and Great Grandchildren. Her passion became Genealogy, tracing her family and anyone else’s family that showed an interest. Determination and countless hours of research left her satisfied that she left the history of her family for others to enjoy. Rada spent her entire life enjoying her family and her children along with their activities. Camping, Hunting, fishing, gardening, sewing and country music, were all things that brought her joy. She was a member of the Rebekah’s lodge and served as Past Nobel Grand in 1963. Rada Ann was preceded in death by her beloved Son, Charles (Dobey) Dean Elliott, Husband’s, Alvas C. (Cook) Elliott, Virgil V. Rutledge and Earl A. Jackson, Her parents Edmon S. & Elsie Mae Forga, her Brothers, Elvis, Elvin, Carl, Perry and Kenneth Forga. Sisters, Mary Lavern Forga, and Eva Mae Alexander, Nephew Ronald Alexander and Great Niece Lacey McLain. Rada is survived by her Daughter, Susan (Elliott) Collins of Lincoln, CA, Son, Larry Elliott and Daughter in Law Tina Elliott of Talent, OR, and a Brother Clyde Forga of Salem, OR. Grandchildren-Kenneth Charles Elliott (Nicole), Cassandra Jo Brainerd (Steve), Kathrynn Ann White (Sean), and Kristen Elizabeth Collins (Joshuah Roblez). Great Grandchildren-Madison Leeann and Kayla Josephine Brainerd, Olivia Kay Lynn, Avery Elizabeth and Saylor Ann White. Rada had numerous nieces and nephews that she adored and she followed all their family adventures. Shara Cox (Gene), Joanne Doughty (Larry) and Brenda (Rob) Thornton were not just family, but considered best friends through the years. Donations in the memory of Rada may be made to the Lake County Disaster Unit 245 N. F St. Lakeview, OR 97630 or the charity of their choice. Memorial Service to be held at a later date.

The family of Rada Ann Jackson created this Life Tributes page to make it easy to share your memories.

Send flowers to the Jackson family.