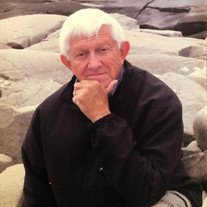 Robert Bruce Duncan On December 9, 2020, we lost one of the most immeasurably kind and gentlest men the earth has known, Bruce Duncan. Surrounded by his loved ones, he died peacefully following an intracranial hemorrhage. A man of abounding love, Bruce leaves behind his dear wife Trudy of 53 years; daughter Jen Sallee and husband Michael (Ashland); and sons Rob and wife Lillian (Boston, MA), Paul and wife Kim (Edmonds, WA), and Jason (Portland). Together with their three grandchildren, Olivia and Isabella (Ashland), and Owen (Massachusetts), they were the lucky recipients of Bruce’s constant love daily. His family was his life’s greatest achievement and gift. Born in Hastings, Nebraska, in 1942 to Roy and Virginia, Bruce spent his first years in the Cornhusker State before moving to Marietta, Georgia, at grade school, and leaving only after graduation from North Georgia College, a small military school. After graduation, Bruce spent three years as an officer in the US Army, serving with the 4th Infantry Division in Viet Nam in 1966-67. A year in Anniston, Alabama, at Ft. McClellan after marriage to Trudy convinced both to go back to civilian life, moving next to Seattle; he had reached the rank of Captain. After spending two years in Seattle at the NW Kidney Center, Bruce was recruited by Drake Willock, in Milwaukie, Oregon, as their Training and Education Manager, teaching doctors, nurses, and technicians about their dialysis equipment. Bruce and Trudy moved to Portland where they lived for 35 years, raising their children in the wonderful Westmoreland neighborhood in a 1913 built home. He enjoyed being a Boy Scout leader, proudly showing off the many badges he earned as a young scout. Bruce was always there for his children, whether it was coaching a soccer team for his boys or cheering his daughter on at numerous dance recitals and dance team performances in high school. His faithful presence rewarded him in becoming the kind of dad that all his children’s friends quickly realized was a near perfect father and friend. Bruce spent his last 20 years before retirement creating one-of-a-kind, items out of plastic materials in his shop known as “Plastics Works.” His artistic side and the joy he experienced creating was truly satisfied during this time. He took immense pleasure designing and manufacturing whatever a customer might want, knowing whether it was only one item or 500, he could do it—and he did! Bruce’s passionate commitment to his family extended into his retirement in Ashland in 2007, where he became a familiar presence at many of his granddaughters’ school programs, dance recitals, and sporting events. He couldn’t imagine more rewarding time spent. Bruce was so very much convinced that the West Coast was a little-known secret and he forged many enduring friendships throughout the 52 years he lived in Seattle, Portland, and finally Ashland. The 31 years Bruce and Trudy co-owned with Darrell and Joanne Mecklem a beach home in Cannon Beach brought about incredible joys and lasting memories with friends and family. Friendships made at King of Kings Lutheran Church in Milwaukie, Oregon, have also continued through the years despite the couple’s move to Ashland. He was a faithful and active congregant, serving more than once on the church Council. Bruce was a true adventurer, always willing to take the road less traveled on six cross country sojourns across the US with Trudy, plotting a new route each time. He was proud to say that they had visited all 50 states, creating unique and lasting memories of places many have not even heard of! Chicken, Alaska is a perfect example of this! Family and friends visited along the way cemented many lifelong bonds, despite the time between visits.

Robert Bruce Duncan On December 9, 2020, we lost one of the most immeasurably kind and gentlest men the earth has known, Bruce Duncan. Surrounded by his loved ones, he died peacefully following an intracranial hemorrhage. A man of abounding... View Obituary & Service Information

The family of Robert "Bob" Bruce Duncan created this Life Tributes page to make it easy to share your memories.

Send flowers to the Duncan family.