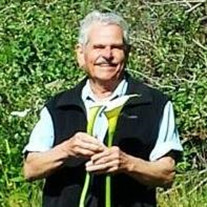 Robert Henry Scheppler, age 82, passed away November 1, 2019, at his home in Ashland, OR, with family by his side. Born July 26, 1937 in Grand Prairie, TX, Robert is preceded in death by his mother, Marcia, father, Henry, and sister, LaMoyne, as well as grandchildren, Dale and Joseph. He lived an extraordinary life, traveling the world, and making his home in various cities, including Rochester, NY, Key West, FL, Austin, TX, Brookings, OR, and even Nsukka, Nigeria. Robert earned his undergraduate and master’s degrees at The University of Texas, Austin, and his PhD at The University of Guelph, Ontario. He was the first American scholar to be granted access in Germany for research after WWII. Robert served in the Texas Air National Guard, Reserves. He then went on to serve as a member of the first group of United States Peace Corps volunteers at The University of Nsukka, Nigeria. He wore many caps in the professional world, historian, university professor, astronomer, truck driver, Director of McDonald Observatory Visitor’s Center, DJ/talk show host for Jefferson Public Radio, as well as printer/publisher for Arvin Publications. Robert is survived by Vincenette Scheppler, beloved wife of 58 years, children, Thomas Desmond Scheppler (Rebekah), John Francis Scheppler (Jessica), Marcia Aline Scheppler, David Henry Scheppler (Elizabeth), grandchildren, Lucas, Christopher, Joseph, Kassidy, John, Melanie, Jacob, and several great-grandchildren. There were many hobbies at which Robert excelled in practice, among them astronomy, reading, photography, gardening, traveling, art – he painted amazing replicas of works by Picasso and Van Gogh. He was, simply put, a Renaissance Man. Robert identified with these quotes, “Every atom in your body came from a star that exploded, and the atoms in your left hand probably came from a different star than your right hand…forget Jesus: the stars died so you could be here today.” “Death should not come and take us away. We should go and meet it.”

Robert Henry Scheppler, age 82, passed away November 1, 2019, at his home in Ashland, OR, with family by his side. Born July 26, 1937 in Grand Prairie, TX, Robert is preceded in death by his mother, Marcia, father, Henry, and sister, LaMoyne,... View Obituary & Service Information

The family of Robert Scheppler created this Life Tributes page to make it easy to share your memories.

Send flowers to the Scheppler family.