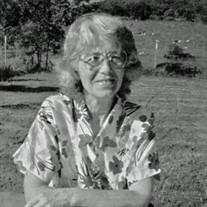 Rose Marie Davis August 21, 1930 – July 4, 2019 Independent as always, Rose Marie Davis passed away peacefully at home July 4. Born near Ladysmith, Wisconsin, Rose Marie has often been described as a remarkable woman. During her life she was, often simultaneously, a mother, a rancher, a fabulous cook and baker, a prolific grant writer, and an expert in salmon fisheries restoration. More than anything, she was an educator. She started her career at age 17, teaching in a one room schoolhouse on a dairy farm in Wisconsin. As she liked to tell, teaching was only one of the duties, as she also had to clean the schoolhouse, chop wood and build the fire, and function as teacher, principal, and nurse. Forty-eight years later she finished her education career as elementary school and secondary school principal in Condon, Oregon. During that time she also taught outside Florence, Oregon in another one room schoolhouse, and was a classroom teacher in Eagle Point, Oregon and in Ashland, Oregon. Teaching at Lincoln School in Ashland, she trained countless student teachers. She also trained many other teachers in her work through both Southern Oregon College (SOU) and Northwest Regional Educational Laboratory (Education Northwest), working throughout Oregon as well as in Washington and Alaska. She continued to impact students and teachers as principal of Briscoe and Lincoln schools in Ashland before moving on as a principal to Condon, Oregon. From 1961 on, she also lived and worked on the family cattle ranch outside of Talent, Oregon. During most of those years, she not only worked long hours as an educator, but also ranched; milking and feeding cows, irrigating fields, cutting, baling, and hauling hay, and doctoring sick and injured animals. In her spare time, she developed culinary artistry, especially in baking with one of her pies being featured in Sunset magazine. After retiring from education in 1995, she began a second career in salmon fisheries restoration. Working with local watershed councils and other organizations, she identified funding, wrote grants, and coordinated projects to remove barriers to salmon migration in local streams. Her experience as a rancher made her particularly effective in projects for the removal of push-up dams for irrigation. Rose Marie is survived by her brother Hubert (Sally) of Ladysmith, Wisconsin and sons Vernon (Naina) of Phoenix and Forest of Talent. There will be a celebration of Rose Marie's life Saturday, August 24, at 2:00 pm at the Ashland First Methodist Church, 175 N Main Street. An online guest book may be found at www.litwillersimonsen.com. In lieu of flowers, donations may be made to Rose Marie Davis Endowed Scholarship Fund at the College of Education, University of Oregon; to the Davis Fisheries and Wildlife Scholarship at the Department of Fisheries and Wildlife at Oregon State University; to Rogue Flyfishers; or to the alzheimer's association.

The family of Rose Marie Davis created this Life Tributes page to make it easy to share your memories.

Send flowers to the Davis family.