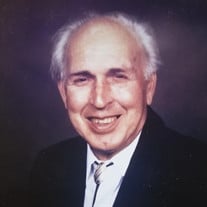 RUSSELL GILBERT ELDER, 89, of Trail, Oregon passed away October 23, 2019 in the place he loved most, the woods. Russell was born December 28, 1929 in Grants Pass, Oregon to Gilbert and Mildred Elder. A pioneer in the logging industry of Southern Oregon, he spent his entire career working in the woods. He was a master mechanic, equipment operator and logging supervisor. His career started with his dad, Bud Elder, uncles, and brothers working in mills which they built, first at Jump Off Joe, then at Trail Creek. He worked for many years as a partner in the Elder Logging Company with Bud and his brother Delvin. He followed this with years working for Vanderlip Logging as a logging manager on conventional, high lead and chipping sites. During this period, he also built many miles of road on Forest Service and Weyerhaeuser timberland. He then formed R&D Wood Products with his wife Debby, in northern California, logging and chipping. His final years were spent working for Vanderlip Logging, and Jim Farmer Logging, operating and maintaining logging equipment. During this time, he worked with his sons, Gary and Tye, brother Elden, and cousin Jim Vanderlip, which was the highlight of his career. An old truck driver that hauled logs for Jim once said it was like “stepping back in time” to haul logs off of their job. To see Russell, 80 plus years old, pulling a turn of logs into the landing, and Jim Vanderlip, 70, lifting his trailer off, looking out through the woods and seeing Elden and Gary, cutting timber….what a great picture! It is so hard to consolidate such a voluminous lifetime into a few sentences. Russell will always be remembered as a journeyman logger, none better, tough as nails but gentle, and with a great sense of humor. He always had a smile on his face, and a helping hand for anyone in need. He saw an industry as few have, from stump to milled lumber. His friends are innumerable, his family many and close. All will miss this giant of a man. Russell was preceded in death by his parents, his first wife Dorothy, brother Elden and John Patrick, and sons Rusty and Seth. He is survived by wife Debby; brothers Delvin and David; sisters Nadeane and Ann; daughter Lori, as well as sons Gary, Steve, Scott, Keith, and Tye; step-sons Kenneth, Brandon, and Matthew, as well as 11 grandchildren; eight greatgrandchildren, and many nieces and nephews. There will be a Celebration of Life at 559 Vista Park Drive, Eagle Point, OR 97524 on Saturday, November 2, 2019 from 10:00 a.m., to 5:00 p.m. Memorial contributions may be made to POWER J C, 4155 Omaha Avenue, Medford, OR 97501.

RUSSELL GILBERT ELDER, 89, of Trail, Oregon passed away October 23, 2019 in the place he loved most, the woods. Russell was born December 28, 1929 in Grants Pass, Oregon to Gilbert and Mildred Elder. A pioneer in the logging industry of Southern... View Obituary & Service Information

The family of Russell Elder created this Life Tributes page to make it easy to share your memories.

Send flowers to the Elder family.