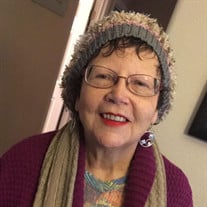 Loving daughter, wife, mother, and grandmother Sheila Diedre Taylor Aparicio was born June 18th 1948 in Altadena, CA. She was the fourth child of Floyd and Jeneveve (Whaley) Taylor. Surrounded by family, she passed away peacefully on November 22nd 2019 A longtime resident of the Rogue Valley, Sheila graduated from Phoenix High School and went on to business school. In 1971 she met Ruben Aparicio, the love of her life; and in March of 1972 he whisked her away to Reno and they married. Together they raised three children: Harold “Tony”, Deborah, and Nick. After working at various places, she found her passion working in phone communication services. After retirement, Sheila volunteered for numerous organizations; including: the Medford Information Center, the Cancer Society, and being a pink lady with RVMC. Sheila enjoyed traveling, especially to the coast, taking her family to Disneyland, shopping, reading, collecting multiple treasures and spending time with her friends and family. Shelia is survived by her husband Ruben Aparicio of Talent, OR; brother and sister-in-law Floyd and Jo Taylor of Phoenix, OR; son, Harold “Tony” Fellows and his children Nicole and Carston of Springfield OR; daughter and son-in-law Deborah and Tony Straub, and their daughters Taelor, Raechel and son-in-law Erny of Phoenix OR; son and daughter-in-law Nick and Rebecca Aparicio and their children Kailee, Alexandre, Emma, Isabelle and Grayson of Salem OR; and many nieces and nephews. She was preceded in death by her parents Floyd and Jeneveve Taylor, brother David Taylor, sisters Ginger Taylor, Vicky Bray, Billie Hagert and nephew Stephen Hagert.

The family of Sheila Diedre Aparicio created this Life Tributes page to make it easy to share your memories.

Send flowers to the Aparicio family.