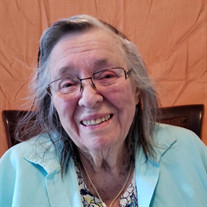 Shirley Gates, Ashland, Oregon, died peacefully at Celia’s House, Medford on January 22, 2022. Born March 2, 1928 in Kansas City, MO to Roy E and Marion (Lyon) Keim, Shirley’s childhood was spent traveling to many Tennessee Valley Authority projects her engineer father worked on throughout the South and Midwest. She graduated from Fontana High School (North Carolina) and was forever a “Dam kid;” the group continued reunions in NC until recently. Shirley graduated from the University of Colorado, Boulder with a degree in journalism. While there she met Philip Gates on a blind date; they married on September 1, 1949 in Richland, Washington, returning to Phil’s home in Oregon, settling in Ashland in 1950. Shirley joined the Meals on Wheels program, was an early member of the Tudor Guild at the Oregon Shakespearean Festival Association, joined the Ashland Fortnightly Study Club, PEO Organization, and the Trinity Episcopal Church. She attended many classes through the SOU OLLI program, and later she and Phil became Ombudsmen with Jackson County Senior Services and visited folks in Care Facilities throughout Jackson County. Shirley and Phil were also active in the American Field Studies program, sponsoring students traveling to and from the USA for a year of study in a new country. Shirley and Phil welcomed daughters Debra in 1952 and Donna in 1955. Shirley participated fully in her daughters’ activities, serving as a Girl Scout leader, Room Mother, PTA volunteer, Debate Team chauffeur, and always welcomed their friends to her home. In the early 1960’s the family began visiting Shasta Lake in N. California several times a year for water-skiing and visiting with friends made at the Salt Creek Lodge on the lake. Shirley prided herself on taking one last ski run at age 80. After retirement, Shirley and Phil travelled throughout the United States in their trailer, visiting friends every step of the way. They particularly enjoyed trips to the Oregon Coast, and to Seattle to visit Donna, Jim, and Jonathan. Travels included trips to Hawaii, South American, Alaska, and the Baltic Sean. She was an excellent cook, enjoyed bridge, her study club, friends, and family. Shirley never could say no to a party and loved to visit anyone, old friends and new. Her daughters’ friends called her Momma Gates and other family friends called her Uncle Shirl. Shirley was predeceased by her parents, Roy and Marion Keim, husband Philip, and brother Robert. She is survived by daughters Debra Gates (Abert Lee), Medford; Donna Gates (Jim) Hawkins and grandson Jonathan Hawkins (all of Seattle, WA); nieces Janet Keim Luppino and Beverly Keim; cousins Jeffrey, Nels, and Eric Larson; and too many friends to list! A Celebration of Life will be held 1:00pm, March 28th at the Trinity Episcopal Church in Ashland, with a reception following at the Elks Club, Ashland.

The family of Shirley K. Gates created this Life Tributes page to make it easy to share your memories.

Send flowers to the Gates family.