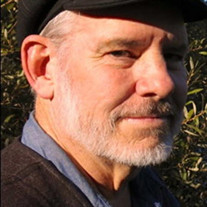 Thomas Doty, a regionally famous author and storyteller in the Native American tradition is being remembered as an artist and scientist who worked diligently over many decades to rescue the mythology and lifeways of the Takelma, Shasta and other tribes who occupied this area for 15,000 years before white settlement. Doty, a native of Ashland, died unexpectedly June 11, six days after a fall down a full length of stairs at Black Sheep restaurant on the Ashland Plaza. He was 67. “It was a freak accident. He fractured two vertebrae in his neck, spent the night in the hospital, came home, was on pain pills,” says his creative partner Tish McFadden. “I brought him food. He was talkative, but didn’t remember the fall. ... He died June 11, in his sleep.” Doty often performed with musician McFadden and collaborated on her book of Indian tales, “Upriver to Morning: A Journey to Wisdom.” A stickler for historical accuracy, Doty spent his life gathering Native stories from anthropologists, petroglyphs and tribal elders, especially Takelma elder Agnes Baker Pilgrim — and weaving them into dramatic presentations and storytelling, which he gave at area schools, camps, museums, libraries, wineries and clubs over the past 40 years. He leaves a 1,000-page legacy of his stories at his dotycoyote.com and much in his book and audio, “Doty Meets Coyote,” published in 2016 by Blackstone Publishing of Ashland. “He was working like mad on his website and was about to do a massive educational component,” said McFadden. “He was hyped all the time, writing stories.” Environmental researcher and friend Julie Norman of Ashland recalled that when “Grandma Aggie” Pilgrim and others were trying in 2007 to locate the site of an ancient salmon ceremony, Doty was given a photo of her father at the sacred site and hiked around the Rogue River near Gold Hill until he found the exact spot, allowing the ceremony to resume. It is still celebrated and, Norman said, “is an incredible gift from Tom.” Doty studied the disappearing Takelma language, accumulated thousands of pages of information on native cultures and, Norman said, was nationally recognized as an authority in the field. Lifelong friend, historian and colleague Mary Buckley Mikkelsen, who worked with Doty on the salmon ceremony and other projects, noted they would develop mythical characters by voicing them back and forth. “He was a wonderful friend and companion, and so well loved,” said Norman. “He was respected nationwide as a storyteller. He loved to saunter the hills. That’s what he called it, sauntering. He loved acting and going to ancient sites. We spent a lot of time at the Gold Hill site praying. He was very special, like a brother.” Friend and elementary teacher David Tourvan notes that Doty “would gather all the kids in a circle and mesmerize them with different voices, wild facial expressions that made you feel part of the story. He was so approachable and kind, so wise and humble. I will never forget the rhythm of his speech, the tone of his narrator voice, and the look on the kids’ faces as they gathered around him, like people have for thousands of years. I have told my children his stories, they will tell their children, and in that spirit, his story lives on.” Friend Murray Huggins of Medford notes, “He was an American icon in Southern Oregon who brought the sacred into the memory of our community. He knew every tree, creek and rock here. I grew up hearing his stories. I hosted a house concert for him four years ago and packed my home with friends and family. In this kind of intimate setting, Thom shined. Everyone sat silent, intent on his every word, transformed, running with coyote.” McFadden adds, “He loved bringing the past into the present. He did the voices, hand gestures and never looked at a page. He became the character, with incredible integrity and a great sense of humor. He was a wonderful father and a true scholar and a gentleman, someone who was the best he could be to the community.” Doty had ancestors on the Mayflower, the Oregon Trail and on Sir Francis Drake’s first expedition to the Oregon Coast in 1579, his website says. He grew up in Medford and graduated from South Medford High School. As he realized the importance of saving Indian lore, he got a speech therapist at age 28, and overcame a dread of public speaking, thus opening the doors to a storytelling career. “Telling an Indian story in person is a very intimate exercise,” Doty said in a 2016 Ashland Tidings story. “There’s a lot of movement and gesture, based in the Indian sign language. It’s a sharing where you use all the tools at your disposal, including my 15 masks. “There are two things I do as a storyteller. I keep the old-time stories alive with integrity for the core of the story. It never changes. Second is the art of creating new Native American stories, as a storyteller, which is what’s been done for thousands of years.” For his memorial, a gofundme drive has been mounted, called Paying Tribute to Thomas Doty. John Darling is an Ashland freelance writer. Reach him at [email protected]

Thomas Doty, a regionally famous author and storyteller in the Native American tradition is being remembered as an artist and scientist who worked diligently over many decades to rescue the mythology and lifeways of the Takelma, Shasta and other... View Obituary & Service Information

The family of Thomas Frederick Doty created this Life Tributes page to make it easy to share your memories.

Thomas Doty, a regionally famous author and storyteller in the...

Send flowers to the Doty family.