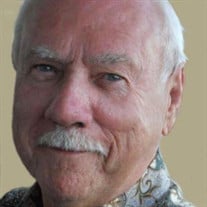 Tom Seigfried, age 86, passed away at his home in Ashland, Oregon, surrounded by loved ones on Thanksgiving Day, Thursday, November 25th. After a long struggle with Dementia he is now at peace and we are comforted knowing that Tom Seigfried remembers who Tom Seigfried is again. Tom was known for his sense of humor and passion for life, always ready with a good joke to make people laugh. He had a strong love for the ocean and adventure; boating and fishing at Catalina Island, Marlin fishing in Mexico, river trips with friends, family vacations to Hawaii. He also took great pleasure going on camping trips with his nephews “The Doyle Boys”! In later years he enjoyed golfing, however his golf game may have been subpar. He also enjoyed playing the ukulele and collecting cars (although, one at a time). One of Tom’s greatest passions was being a loving father. His daughter, Christy calls him her Hero, and even as an adult she still sees him that way. He was always there through good times and bad, teaching her to enjoy every moment but most importantly embrace the humor life has to offer! Born in Easton, Pennsylvania to Walter and Elizabeth Seigfried, little Tommy was a lifelong Catholic with a beautiful voice, participating in the church choir from the time he was a child long into late-adulthood. He attended West Philadelphia Catholic High School for Boys before moving to Long Beach, California. He graduated from St. Anthony’s High School in 1953 when he met his best-friend and future bride Mickie (Soltes) Seigfried. They were married in 1957 and adopted their “Little Chrissy” in 1964. He began his lifetime career with General Telephone Company at the age of 19, starting as a lineman, climbing telephone poles, installing and repairing lines all across Southern California in the 1950’s-60’s, which came in handy during his time in the Army teaching others to climb & run lines. He worked his way into GTE management, transforming alongside the new age of digital technology in the 1970’s & 80’s before retiring after 45+ years. After moving to Oregon in 1995, Tom and Mickie became devoted volunteers with the Ashland Police Department (bless you SAM-37). His commitment lasted 17 years; his most fulfilling task was coordinating the Crossing Guard Program to ensure the safety of Ashland school crosswalk zones every morning and afternoon. Tom is survived by his daughter, Christy Seigfried of Ashland, OR; two grandchildren, David T.(Lauren) Schueller and Jennifer D.(Jamey) Dadaos; three great-grandchildren, Hayden, Jacob and Riley; numerous in-laws, nieces, nephews, and godchildren. He was preceded in passing by his beloved wife, Mickie Seigfried, his parents Walter and Elizabeth, his sister, Elizabeth “Betty” Doyle and his nephew Greg Doyle. Services to be held Saturday, December 18, 2021 at Our Lady of the Mountain Catholic Church. The Rosary will be prayed at 10:00 a.m. followed by a Funeral mass at 11:00 a.m. All are welcome at one or both services. Tom will later be placed at Scenic Hills Memorial Park with his spouse, “Mickie.” In lieu of flowers, memorial donations may be made to: alz.org/renew, state or local police, ocean preservation, or to a local animal shelter. If you are unable to attend the service in person, we will create a zoom party so you can attend virtually. If you are interested, please email Jenny at [email protected] for the link to attend.

Tom Seigfried, age 86, passed away at his home in Ashland, Oregon, surrounded by loved ones on Thanksgiving Day, Thursday, November 25th. After a long struggle with Dementia he is now at peace and we are comforted knowing that Tom Seigfried... View Obituary & Service Information

The family of Thomas Seigfried created this Life Tributes page to make it easy to share your memories.

Tom Seigfried, age 86, passed away at his home in Ashland, Oregon,...

Send flowers to the Seigfried family.