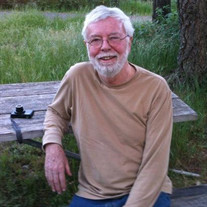 Timothy Andrew Wohlforth May 15, 1933-August 23, 2019 Tim Wohlforth was an adventurer who spent his life seeking experiences that provided opportunities in political activities, community service and mystery writing. As a young student at Oberlin College, Tim promoted interest in the Democratic Socialist of America (DSA). For much of his life, Tim participated in causes that represented social democracy through workers’ rights. While living in the Bay Area, prior to his life in Ashland, Tim continued to participate in DSA activity and worked as a lithographer for Alameda County. He also enjoyed California’s natural beauty as experienced through trips to Yosemite and walks in the Redwoods. During his years in Ashland, Tim taught numerous classes at OLLI, which were centered around political themes… 1968, Utopia, and The Dangers of Cults to name a few. For the last seven years, Tim, along with friends, have been hosting a film group which meets weekly. The group views and discusses various film genres often with emphasis on noir through Tim’s influence. Tim’s writing efforts resulted in the completion of ten books, one of which is co-authored, most are mysteries that have a noir mood. Recently one of his books Harry was adapted for the stage. Soon after arriving in Ashland, Tim founded a mystery writers’ group, the Monday Mayhem Writers. Tim was preceded in death by his parents Robert and Mildred Wohlforth, and his son, Carl Wohlforth. He is survived by his son William of Lyme, New Hampshire, grandsons Owen and Charlie of Portland, OR, granddaughter Carla of Los Angeles CA, daughter-in-law, Teresa, of San Jose, CA, brother, Eric of Anchorage, Al, and loving companion, Patricia Sempowich of Ashland, OR. A memorial service is planned for September 14 at Peace House at 12:00 noon. The family wishes to thank Asante Hospice for the devoted and loving care that Tim received and Lillibet Gillespie, case manager, for the compassionate care giving professionals that she provided. Donations in Tim’s name may be made to the Ashland Culture of Peace Commission and the Ashland Emergency Food Bank.

Timothy Andrew Wohlforth May 15, 1933-August 23, 2019 Tim Wohlforth was an adventurer who spent his life seeking experiences that provided opportunities in political activities, community service and mystery writing. As a young student at... View Obituary & Service Information

The family of Timothy Andrew Wohlforth created this Life Tributes page to make it easy to share your memories.

Send flowers to the Wohlforth family.