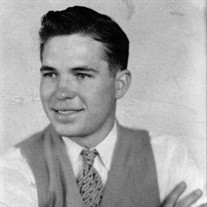 Wallace Alton Budden the beloved Father, Grandfather, Great Grandfather, and Great Great Grandfather, and Uncle passed away peacefully in his home his youngest daughter Wendy Guches by his side. Wally was predeceased by his wife Virginia who was the love of his life who just recently passed in August 2021 They would have been married for 78 years this February. He was also predeceased by his Father Sidney Budden and Mother Lotti Budden, his brothers Raymond, Sid and sister Faye. Wally was survived by his daughters, Tamara Piwen, Vickie Neuenschwander, and Wendy Guches, his Grandchildren, Cindy Poursatip, Maralena Piwen, Jason Piwen, Tyler Neuenschwander, Lance Smith and Chad Smith and 7 Great Grandchildren and 2 Great Great Grandchildren, as well as many nieces and nephews who loved him dearly. Wally was born in Notus Idaho and was a self-taught man. He started his professional life as salesman for Lorenz Co., in Klamath Falls. When that job ended, he and Virginia moved to Ashland and bought his first chainsaw and fell timber for McGrew Bros. His lifelong love of timber falling took him to the coast where he fell timber in the redwoods. He then started his logging business with his brother in law, Jack Brown, calling it Budden & Brown Logging. Him and his wife decided to move back to Ashland, so his daughter could go to college. He continued his logging career in Oregon doing cable logging for environmental reasons. He retired at age 77 from logging. Wally was an original cowboy. He and his wife, bred, trained and sold Arabian horses. Even a race horse. He was a musician and song writer, WWII Veteran (Paratrooper 101st division), multi business owner, carpenter, inventor and author. And despite many of his challenges over the years some medical he survived to 100 years a major goal of his in life! He was celebrated on that occasion by many of his family and friends. What a wonderful day that was for him! He loved his Family above all things, and he spent his life making sure they were cared for! He will never be forgotten for the legacy of his accomplishments and 100 years of life that he left behind in our memories. A private service will be held February 25 at Eagle Point National Cemetery. Please join the family at a Memorial Service for Wally February 25, at 3:30 at Terry and Vickie’s home, 455 Tolman Creek Road, Ashland, Oregon. Arrangements in care of Litwiller-Simonsen Funeral Home, Ashland, Oregon. www.litwillersimonsen.com

The family of Wallace Alton Budden created this Life Tributes page to make it easy to share your memories.

Send flowers to the Budden family.