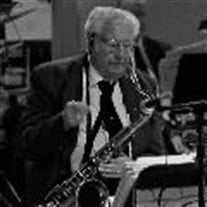 Warren Moore March 30,1923 - July 6, 2019 Warren Hayden Moore was born in Worland, Wyoming to Wilbert Patterson and Effie Annie Moore on March 30, 1923. He graduated from Worland High School in the spring of l941 and in the fall of the same year enrolled at University of Washington in Seattle with a major in music. He remained there until Uncle Sam notified him that he was needed for Military Service. Warren was inducted into the Army on March 13, 1943 at Fort Warren in Cheyenne, WY where he took his basic training. After training, he enrolled in a program sponsored by the Army called the Army Special Training Program, at the University of Nebraska studying Math, English, History, Engineering Drawing, and many other subjects. About a year later the program was discontinued and all the students there were put into a new Infantry Division called the 66th Infantry Division, known as the "Black Panther Division" and were shipped to Europe to reinforce US troops there. He was honorably discharged on April 9, 1946 with authorization to wear the Theater Service Ribbon, the European-African-Middle Eastern Service Ribbon with one Bronze Star, the Good Conduct Medal and the World War Two Victory Medal. During his life time Warren played in many musical groups including College Concert Bands, Pep Bands and Local Big Bands in Seattle, Cincinnati and Denver. He also played in many small groups such as the Easy Valley Eight a Rogue Valley group that performed at the Standing Stone Restaurant in Ashland for 14 years, and the Ashland YMCA's monthly Saturday afternoon Tea Dances for many years. The group also played in many other venues throughout the Rogue Valley. Being a Mason and a Shriner, he played in the Shrine German Band, Concert Band, Dixie Band, and before he moved to Oregon, he was Director and Drum Major of the Shrine Drum and Bugle Corps in Worland, WY. Warren also played in the Ashland City Band for many years. He worked in the Worland Post Office for about ten years as a Carrier, Clerk, and Postmaster. In 1962 he decided to finish his degree and enrolled at the University of Denver graduating in 1964. His first teaching job was in a very small-town North of Worland. After 2 years he decided to explore the West Coast and was hired to teach Instrumental Music in Ashland, OR. He retired in June of 1988. After retirement he enjoyed trips, cruises, fishing, taking painting classes and spending time with family. Warren was preceded in death by his wife of 54 years, Adaire, and his sister Lorene Henry. He is survived by his four children, Gail O'Donovan of Dunkirk MD, Greg Moore (Cheri) of Spokane WA, Brent Moore of Medford OR, and Scott Moore (Janice) of West Linn OR, five grandchildren, Jeremiah O'Donovan (Amanda), John Moore, Heather Moore, Charles Moore, Megan Moore, eight Greatgrandchildren and numerous nieces and nephews. Warren will be interred at the Eagle Point National Cemetery along with his wife, Adaire, in a private family ceremony. A celebration of life will be held on July 20, 2019, 4-6pm at the Grizzly Peak Winery, 1600 E. Nevada St. Ashland, OR. In Lieu of flowers the family requests that donations be made in Warren's name to Food & Friends - https://foodandfriends.org/donate/ or the Shriners - Hillah Shrine Center, 3581 Lear Way, Medford, OR 97504

Warren Moore March 30,1923 - July 6, 2019 Warren Hayden Moore was born in Worland, Wyoming to Wilbert Patterson and Effie Annie Moore on March 30, 1923. He graduated from Worland High School in the spring of l941 and in the fall of the same... View Obituary & Service Information

The family of Warren Moore created this Life Tributes page to make it easy to share your memories.

Send flowers to the Moore family.