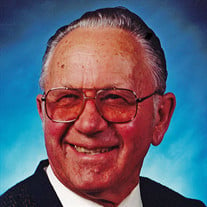 Wesley George Hartley died December 7, 2019, at Ashley Manor in Medford, Oregon. He was born February 13, 1927, in Talent, Oregon, the first child of George Hartley and Florence Dillon Hartley. He grew up on South Pacific Highway near Talent where his parents farmed and operated a fruit stand. When he was seven, Wes learned how to drive a 1918 truck between the hay shocks while his dad pitched the hay in. Wes was a star athlete at Talent High School, participating in football and basketball. He also played trombone in the band and served as student body president. It was there that he met a new student, a “blue eyed, blond girl” named Lily Millage, and they soon became a couple. After graduation in 1945, Wes was inducted into the army and eventually was stationed at Wurzburg, Germany for eight months. He loved to tell how, after his discharge at Ft. Lewis, he traveled by bus to Medford where he spotted Lily getting ready to board the local bus to go home from work and swept her off her feet. He and Lily married on January 12, 1947. Lily’s wedding dress was made from parachute silk that Wes sent to her from Germany. They settled in a small house Wes built on Hartley Road near Talent, Oregon, on two acres of land that had belonged to the family since 1891. Wes joined his father as a partner on his farm and also worked nights at the local sawmill during the winter. In 1956, he was offered a job working with his father-in-law, Roy Millage, as a carpenter. He continued to help his dad on the farm during the summer, but carpentry became his new career. He built many homes in the Ashland and Talent area and was the lead carpenter during the 1969/70 construction of the new building on Siskiyou Boulevard for Ashland’s First Baptist Church. Wes loved nothing more than playing games – football, basketball, baseball, ping pong, and bowling as well as table games. In his sixties he started painting oil landscapes which now hang in the homes of his children, grandchildren and other family members. Wes was a skilled wood worker, creating beautiful pieces of furniture and accessories that will be heirlooms for generations. Gardening was also a passion for Wes and the family looked forward to his famous “Hartley Corn” every summer. In 1967 the family moved from Hartley Road to Ashland. Wes and Lily moved to Medford in 2003. In Medford, they joined Westminster Presbyterian Church and Wes soon was asked to use his woodworking skills there. He made plantstands, a pulpit for the Worship hall, the nicest trash cans the congregation had seen, and a beautiful sign which hangs at the back of the sanctuary stating: Soli Deo Gloria (To God Alone Be Glory). These words also sum up his motto in life. Wes is survived by his wife, Lily; children: Susan Andrews (Joe), Ashland, Wayne Hartley (Karen), Talent, and Joan Schutter (Dan), Newberg, OR; eight grand-children and ten great-grand-children. He was preceded in death by two sons: Ronald Hartley (1970) and Philip Hartley (1986); by his brothers Richard Hartley and Rolly Hartley, and by his parents. A Service of Witness to the Resurrection will be held on Saturday, January 11, 2020 at 1:00 PM at Westminster Presbyterian Church, 2000 Oakwood Drive, Medford OR. Memorial gifts may be made to Westminster Presbyterian Church. Arrangements by Litwiller-Simonsen Funeral Home 1811 Ashland Street, Ashland, Oregon 97520 www.litwillersimonsen.com

The family of Wesley George Hartley created this Life Tributes page to make it easy to share your memories.

Send flowers to the Hartley family.