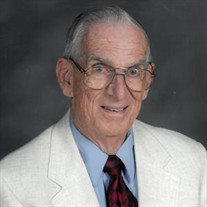 Rev. William Edward Hare passed away on August 09, 2019 from medical complications while going through rehabilitation at Vibra Hospital of Northern California in Redding, California, after a recent 3 week hospital stay for pneumonia at Rogue Regional Medical Hospital in Medford, Oregon. He attended Vancouver High School, Compton College, and received a Bachelor of Business Degree from UCLA and a Master degree from Iliff School of Theology in Denver, Colorado. During his life he had been a member of Masons, Knight Templars, Malta Commandary, Hillah Shriners, Scottish Rite, and Lions Club. During WWII he served in the US Army being sent over to the Philippines for a year, He worked for General Electric Company for 20 years as a salesman. Working in the Southern California area, and in Denver, Colorado area. He also served as a Minister in the United Methodist Church serving churches in Colorado, Oklahoma, Idaho and Oregon. Rev. William Edward Hare had been married 72 years, his wife passing just a little over 5 months ago on February 21, 2019. He had three children, James, Kevin, and Melinda. four grandchildren, Margaret, Amanda, Hanah, and a grandson, Bill who preceded him in death, and three great-grandchildren, Rosyn, Aisling, and Gideon. During his free time he enjoyed fishing, cooking, reading, crossword puzzles, painting, drawing, bowling, and square dancing. He will be missed by his family, many friends and those to whom he ministered. A committal service will be held at Eagle Point National Cemetery on Thursday, September 05, 2019 at 3pm.

Rev. William Edward Hare passed away on August 09, 2019 from medical complications while going through rehabilitation at Vibra Hospital of Northern California in Redding, California, after a recent 3 week hospital stay for pneumonia at Rogue... View Obituary & Service Information

The family of William "Bill" Edward Hare created this Life Tributes page to make it easy to share your memories.

Send flowers to the Hare family.