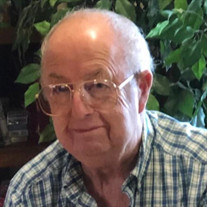 “The only thing that matters is the dash between the dates.” Wilmer Wayne Wiley Jr., (Wayne), was born to Bill and Marie Wiley in Seattle, WA on October 2, 1932. The family moved to Ashland in 1947. Wayne attended Ashland High School, where he was class president and captain of the football team, graduating from Ashland High School in 1951. While at AHS he made many lifelong friends with whom he enjoyed many adventures and many high school class reunions over the years. After graduation Wayne enlisted in the US Navy serving on the USS Iowa during the Korean War. He won many marksmanship awards during this time. After being honorably discharged from the Navy, Wayne returned to Ashland and married his high school sweetheart, Doris James who survives. Their 67th wedding anniversary would have been September 16. They had three daughters, Susan Calhoun of Phoenix, OR, Patty Billings (Tim) of Ashland OR, Chris Dovci (Jeff) of Mansfield, OH. Wayne started working at age 16 for his father’s construction company, Wiley Company. This laid the groundwork for his lifelong career in the commercial construction industry. He worked for several local commercial construction companies finally landing at Todd Building Company now known as Todd Construction, Inc. where he rose to General Superintendent and eventually retired after more than 30 years with Todd Construction. Wayne enjoyed working at restoring his ’57 Chevy pickup, going to his monthly breakfast with his buddies from high school, going to car shows with his high school buddies and being surrounded by his family. After retirement, Wayne and Doris enjoyed many trips both national and international. They spent many winter months in Palm Desert with their friends and enjoyed exploring all that the area had to offer. Family was very important to Wayne, he loved family dinners for every holiday, family birthdays and sometimes just because. In later years he enjoyed being a part of cooking the family meals. He included as family the many people he mentored during his life both in the construction field and in life in general. He was a role model and positive influence to so many. Survivors in addition to his wife and three daughters include 6 grandchildren (Jessica, Brianna, Joey, Emilee, Jon, Mike) and Dave South who he always considered part of the family. He was preceded in death by his parents and his oldest granddaughter, Bonnie Billings. We love and miss you dad. A memorial service will be held at 1:00pm on Sept. 11 at Litwiller-Simonsen Funeral Home. Please remember to wear a mask during the service. The service will also be streamed on FaceBook Live.

&#8220;The only thing that matters is the dash between the dates.&#8221; Wilmer Wayne Wiley Jr., (Wayne), was born to Bill and Marie Wiley in Seattle, WA on October 2, 1932. The family moved to Ashland in 1947. Wayne attended Ashland High... View Obituary & Service Information

“The only thing that matters is the dash between the dates.”

Send flowers to the Wiley family.